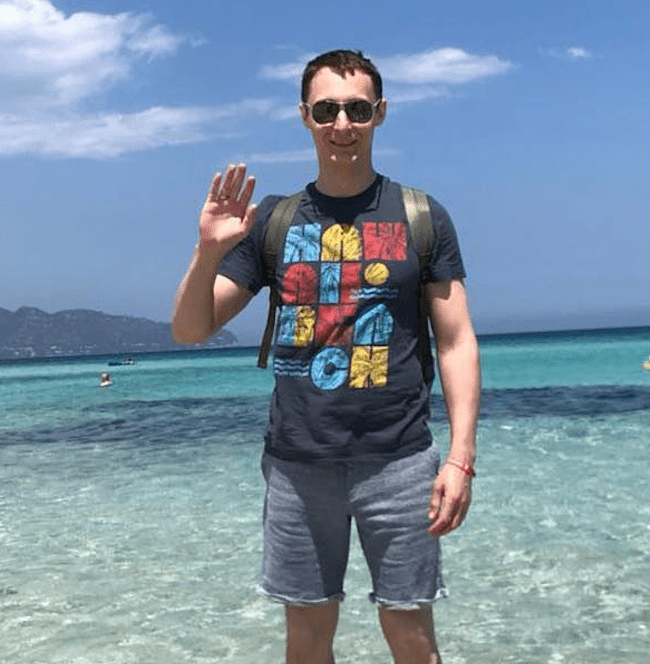 I'm a Software Engineer at heart and SRE by trade. But also I enjoy writing about tech topics.

What is a shim?

The easiest way to spot a shim is to inspect the process tree on a Linux host with a running docker container:

ps auxf output on a host running docker run -it ubuntu bash; notice containerd-shim process in between containerd and bash.

On the one hand, runtimes need shims to be able to survive managers restarts. On the other hand, shims are helping container managers to deal with the quirky behavior of runtimes. As a part of the container manager implementation series, we will try to create our own shim and then integrate it with conman, an experimental container manager. Hopefully, during the development, we will gain an in-depth understanding of the topic.

However, before jumping to the shim development, we need to familiarize ourselves with the container runtime component of the choice. Unsurprisingly, conman uses runc as a container runtime, so I will start the article by covering basic runc use cases alongside its design quirks. Then I'll show the naive way to use runc from code and explain some related pitfalls. The final part of the article will provide an overview of the shim's design.

The detailed explanation of what is a container runtime and why do we need one is out of the scope of this article. If you are lacking this knowledge, read this section first, then check out runc README file, and try out runc --help.

Long story short, runc is a command-line tool for running containerized applications. If this sentence sounds too fancy, you can think of runc as just a tool to spawn a new ordinary Linux process but inside of an isolated environment. The isolation among other things includes a dedicated root file system and a new process tree and is being achieved via Linux namespaces and cgroups facilities. Let's call this new process that runc launches a container process. This process becomes the first process (i.e. PID=1) inside of the newly started container. We will be referring to this process frequently throughout the rest of the article.

Even though runc is most often used behind Docker (through containerd) or cri-o daemons while both oftentimes reside behind a kubelet, it's a standalone executable file, i.e. runc is by no means a library. We will see further on how this design makes the usage of runc from another software somewhat complicated, but now let's try to just play with this tool in our favorite terminal emulator:

NB: runc supports running containers controlled by a Linux pseudoterminal, but today we will not use this functionality and leave its consideration to a separate article.

If we check the corresponding process tree using ps axfo pid,ppid,command in the separate terminal session we will see something similar to this:

The process hierarchy seems absolutely normal. Our login bash session (PID 9503) fork-execed runc process which in turn forked itself (probably due to PID namespace implementation related reasons) and the second fork finally launched the sh shell (PID 22437) inside of the containerized environment.

Now, let's take a look at the produced output:

Notice, that even though from the host system we see the PID of the sh process as 22437, our tiny script printed out Hi, my PID is 1. That's perfect proof that it got its own process ID namespace. We also should set our eyes on the fact that the stdout content of the container was just printed out to our terminal, meaning that stdio streams of our login bash shell have been passed through to the container and then set as its own stdio streams. That’s an important observation we need to keep in mind. We can try to represent the process structure as follows: 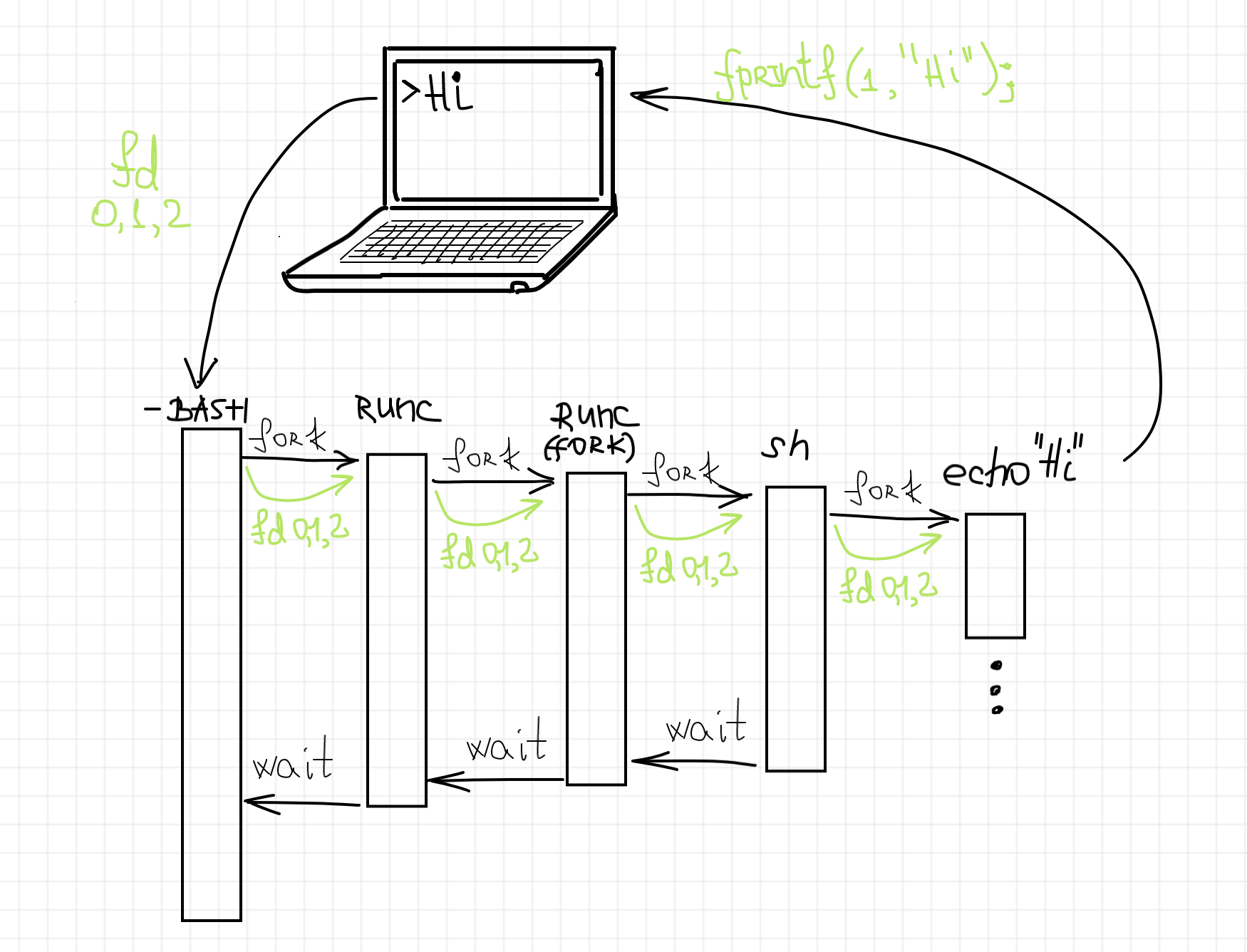 The approach to run containers we just explored is called foreground in runc terminology. It means that the runc process always stays in between the container process and the launching process (bash shell in our example). There is another mode supported by runc, called detached. Let's try to use it:

Notice, how runc releases the execution back to our login shell almost instantly. If we check the corresponding process tree, we will see the following picture:

We can try to depict the corresponding structure of the involved processes and their stdio streams as follows: 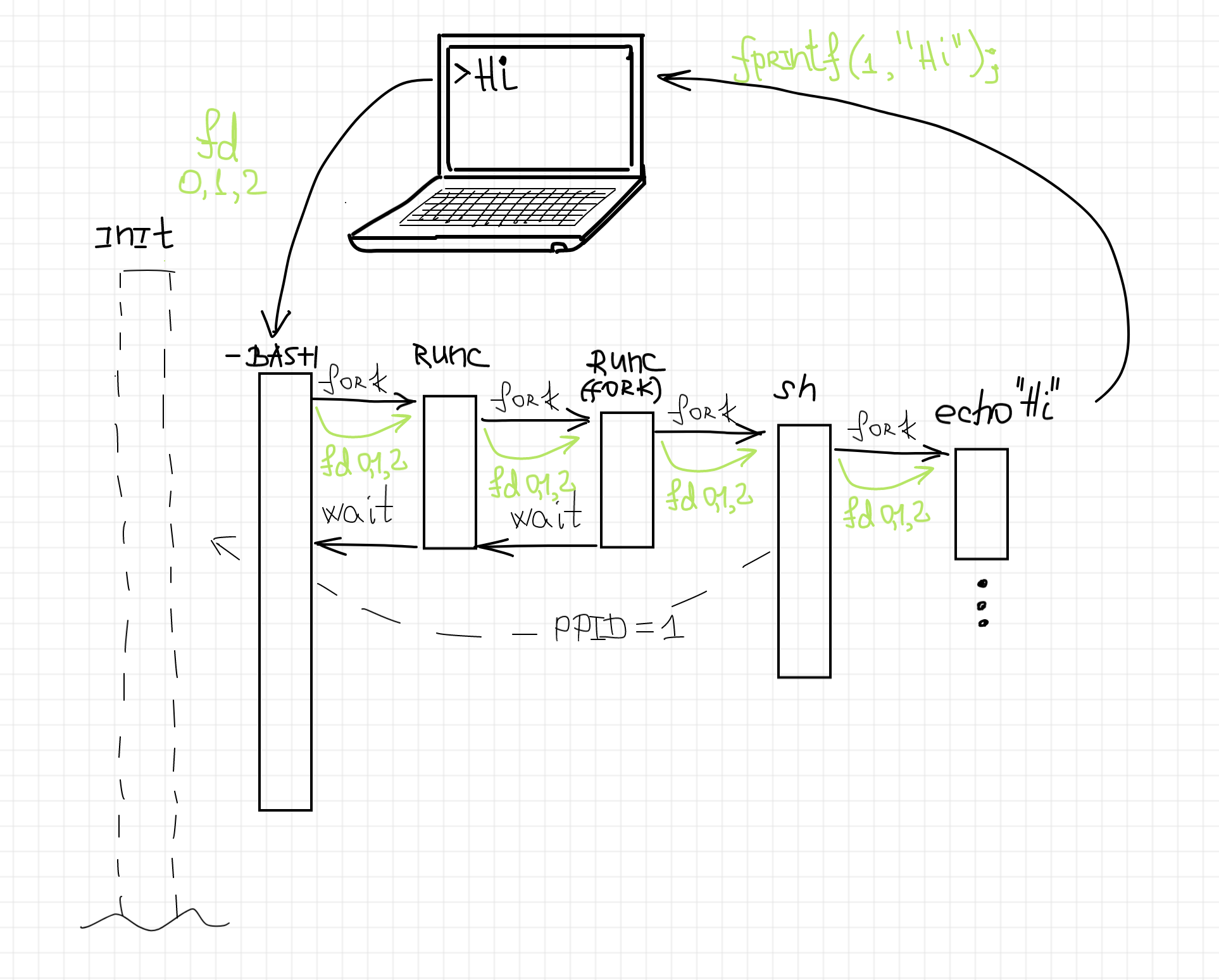 That's how the detached mode is described by runc documentation:

In contrast to foreground mode, in detached mode there is no long-running foreground runc process once the container has started. In fact, there is no long-running runc process at all. However, this means that it is up to the caller to handle the stdio after runc has set it up for you. In a shell this means that the runc command will exit and control will return to the shell, after the container has been set up.

You can run runc in detached mode in one of the following ways:

Unfortunately using detached mode is a bit more complicated and requires more care than the foreground mode -- mainly because it is now up to the caller to handle the stdio of the container.

We need to admit, that the foreground mode has some significant drawbacks and the detached mode has been designed in a way to eliminate them. From the same document:

A naive attempt to use runc from code

By this time we already know how quirky runc is when it comes to handling its stdio streams. We also know the desired mode to use if we want to run runc from container management software. Let's try to make a naive program launching a container with the following sh program:

The idea of the script is fairly simple. Every second it writes the current time to its stdout. Additionally, it catches the SIGPIPE signal (using trap) and reports it by writing /var/trap.log file, then exits.

Finally, let's quickly make a tiny Go container management program. As any container manager, it should be interested in the container's stdout content. It will be reading the data written by the container to its stdout and reporting it back to us. And as we learned earlier, we need to use runc in the detached mode:

Now let's try to use our manager to run a container with the aforementioned script:

It seems like a successful attempt. However, if we check the status of the container after the manager's exit we will notice that the container has been stopped as well:

This is obviously not the desired behavior. Even though the container manager exited, we want to have the container running indefinitely. We even used the detached mode, so we know that the container process was reparented to the host's init process right after the runc run --detach execution. So, what happened to the container?

It's not hard to guess, that the actual container termination reason should have something to do with the ability to write to its stdout. If we check the /var/trap.log file we will prove that theory quickly:

The full scope of the shim

We already know that the container runtime shim has to be a long-lived daemon tightly bound to the container process. Its structure can be expressed as the following diagram: 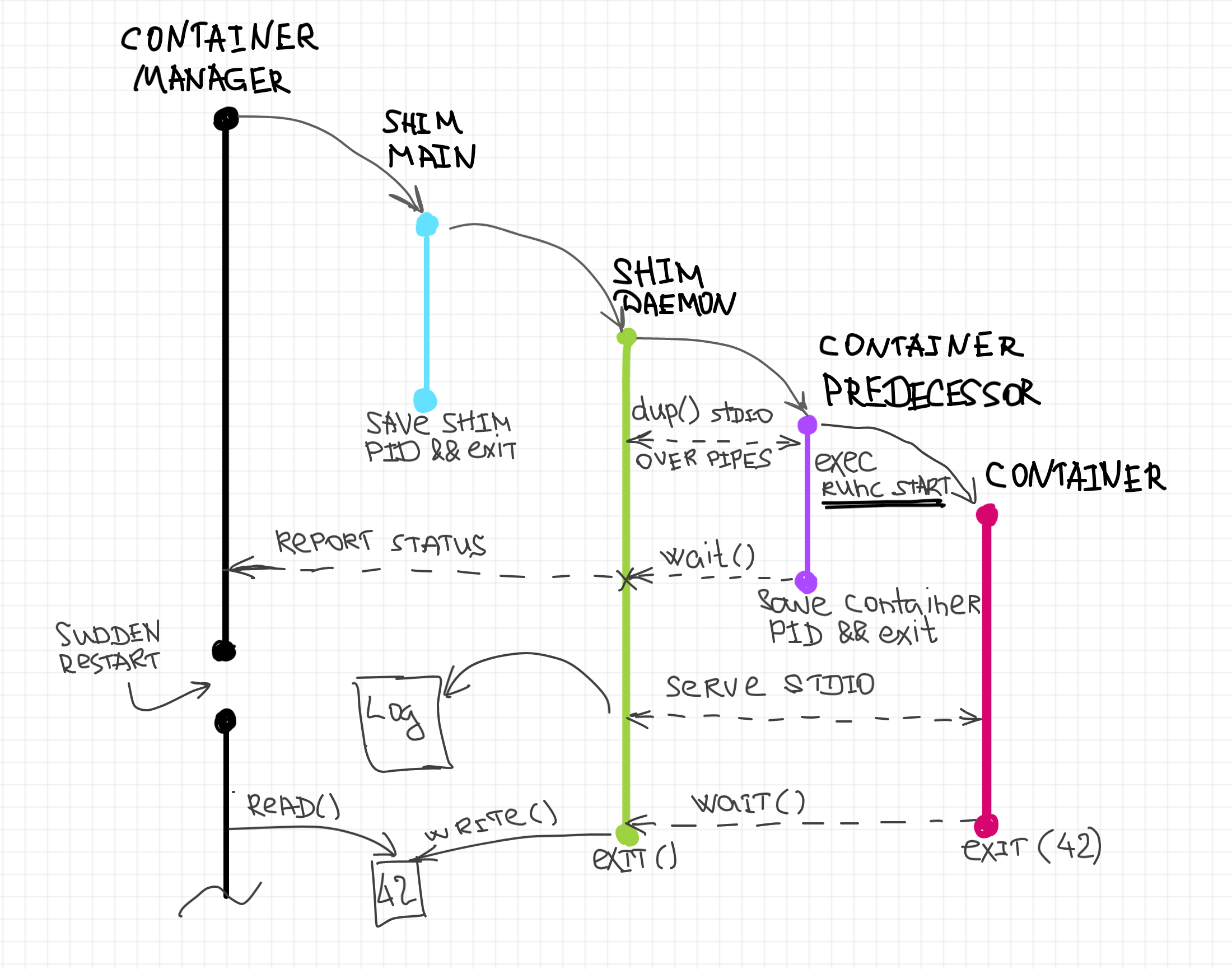 In the following articles, we will see: