Not every container has an operating system inside, but every one of them needs your Linux kernel.

Before going any further it's important to understand the difference between a kernel, an operating system, and a distribution.

To be technically accurate, the title of this article should have sounded something like Does container image have a whole Linux distribution inside? But I find this wording a bit boring for a title 🤪

Does a Container have an Operating System inside?

The majority of Docker examples out there explicitly or implicitly rely on some flavor of the Linux operating system sitting inside a container. I tried to quickly compile a list of the most prominent samples.

Running an interactive shell in the debian jessie distribution:

Running an nginx web-sever in a container and examine its config using cat utility:

Building an image based on Alpine Linux:

For the newcomers learning the containerization through hands-on experimentation, this may lead to a false impression that containers are somewhat indistinguishable from full-fledged operating systems and that they are always based on well-known and wide-spread Linux distributions like debian, centos, or alpine.

At the same time, approaching the containerization topic from the theoretical side (1, 2, 3) may lead to a rather opposite impression that containers (unlike the traditional virtual machines) are supposed to pack only the application (i.e. your code) and its dependencies (i.e. some libraries) instead of a trying to ship a full operating system.

As it usually happens, the truth lies somewhere in between both statements. From the implementation standpoint, a container is indeed just a process (or a bunch of processes) running on the Linux host. The container process is isolated (namespaces) from the rest of the system and restricted from both the resource consumption (cgroups) and security (capabilities, AppArmor, Seccomp) standpoints. But in the end, this is still a regular process, same as any other process on the host system.

Well, if a container is just a regular Linux process, we could try to run a single executable file inside of a container. I.e. instead of putting our application into a fully-featured Linux distribution, we will try to build a container image consisting of a folder with a single file inside. Upon the launch, this folder will become a root folder for the containerized environment.

Create a Container from scratch (with a single executable binary inside)

If you have Go installed on your system, you can utilize its handy cross-compilation abilities:

Build the program from above using:

If we now inspect the hello image with the wonderful dive tool, we will notice that it consists of a directory with the single executable file in it: 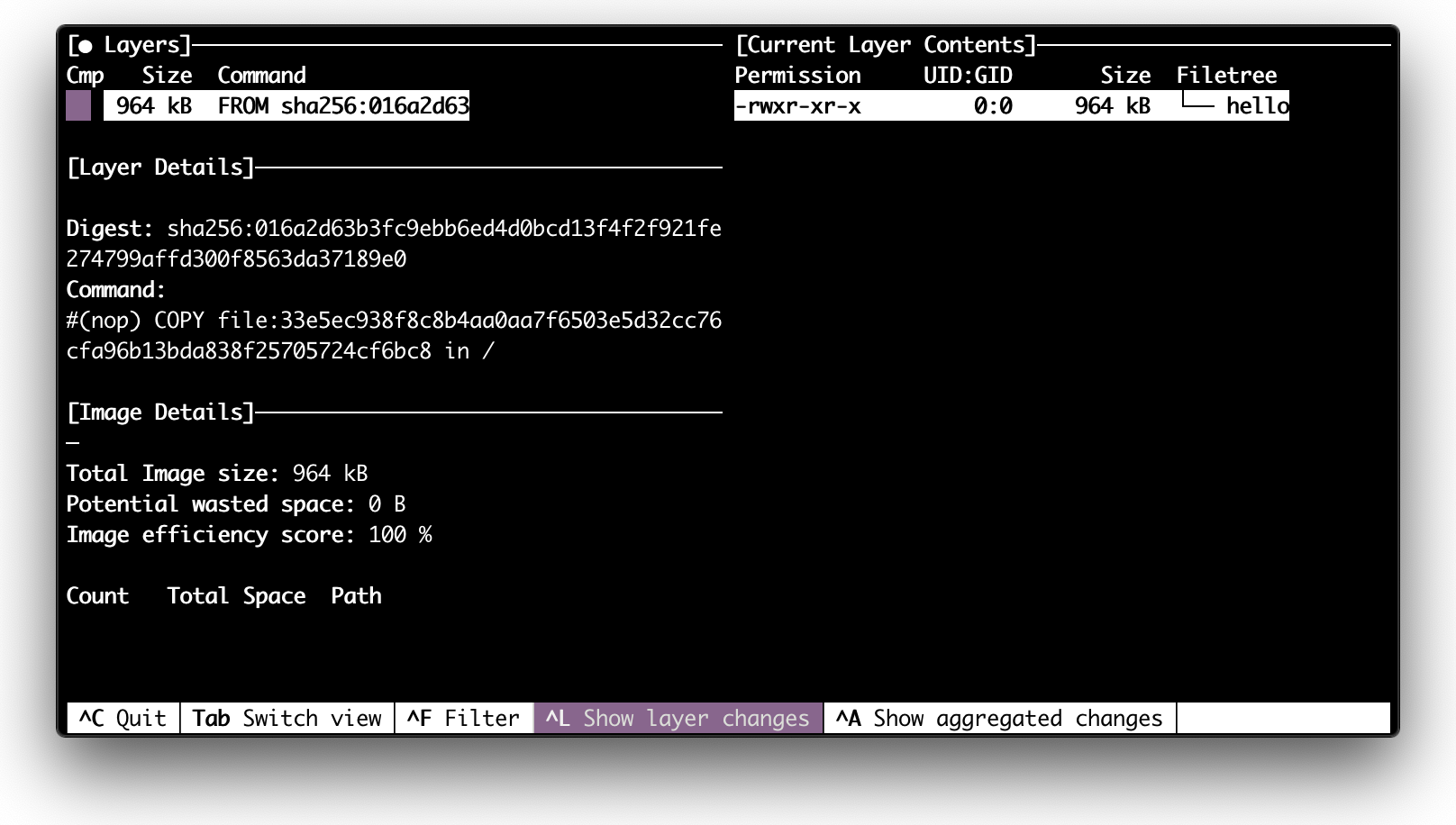 This exercise is roughly what the Docker's hello-world example does. There are two key moments here. First, we based our image on a so-called scratch image. This is just an empty image, i.e. the building starts from the empty folder and then just copies the executable file hello into it. Second, we used a statically linked binary file. I.e. there is no dependency on some shared libraries from the system. So, a bare Linux kernel is enough to execute it.

Now, what if we inspect the nginx image which we used at the beginning of this article? 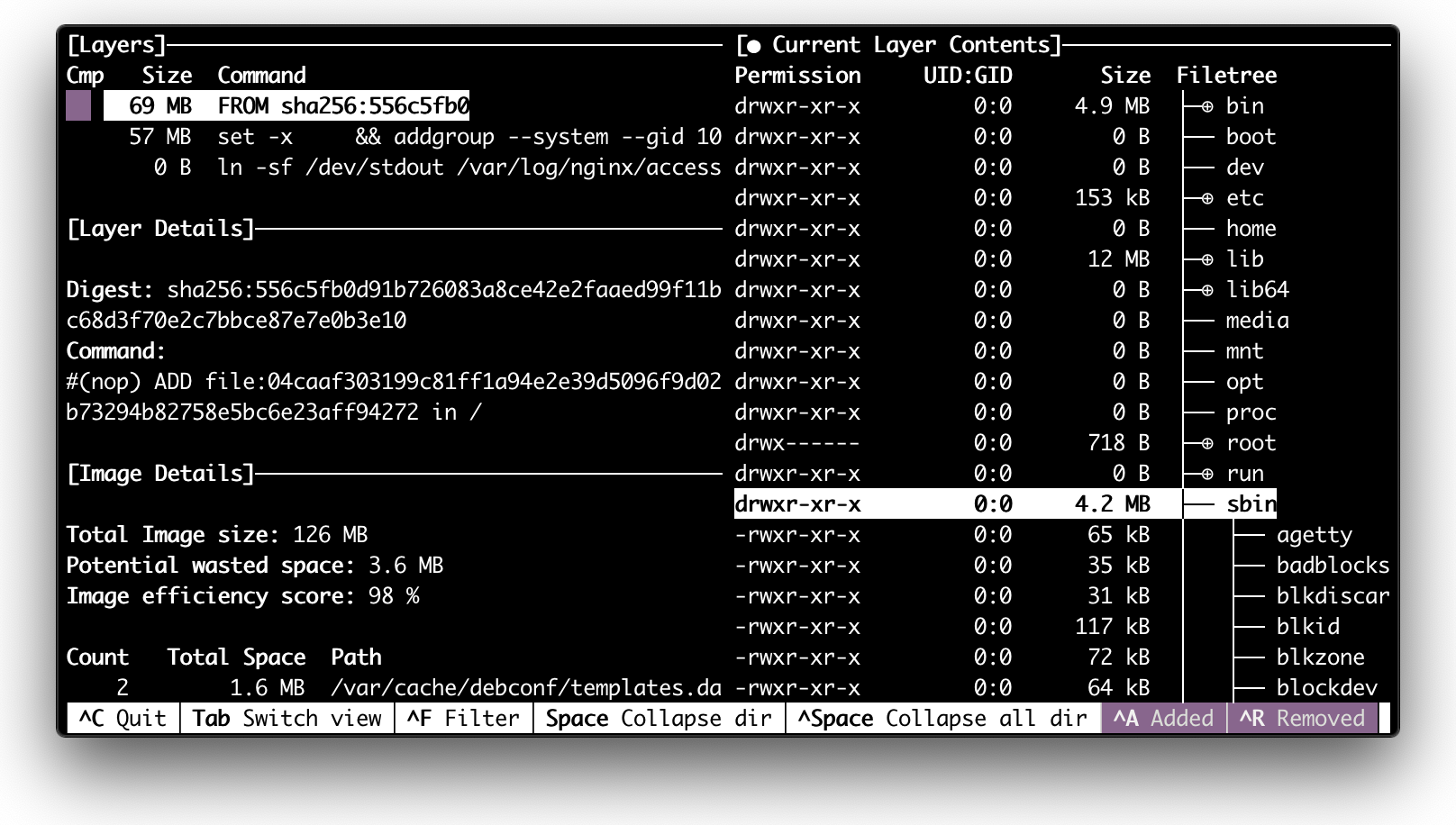 Well, the directory tree looks like a root filesystem of some Linux distribution. If we take a look at the corresponding Dockerfile we can notice that nginx image is based on debian:

And if we dive deeper and examine debian:buster-slim Dockerfile we will see that it just copies a root filesystem to an empty folder:

Combining Debian's user-land with the host's kernel containers start resembling fully-featured operating systems. With nginx image we can use the shell to interact with the container:

Can we do the same for our slim hello container? Obviously not, there is no bash executable inside:

hello container doesn't have bash inside.

So, what should be the conclusion here? The virtualization capabilities of the modern operating systems, namely Linux, turned out to be so powerful that people started packing fully-featured user-lands like debian (or more lightweight alternatives like alpine) into isolated and restricted VM-like execution environments called containers. By virtue of this ability:

But with great power comes great responsibility. Huge containers carrying lots of unnecessary tools slow down deployments and increase the surface of potential cyberattacks. So, it's good to remember that having a full-blown Linux distro in your container is not technically mandatory. Keep your container images slim!