Disclaimer: In 2021, there is still a place for simple setups with just one machine serving all traffic. So, no Kubernetes and no cloud load balancers in this post. Just good old Docker and Podman.

Even when you have just one physical or virtual server, it's often a good idea to run multiple instances of your application on it. Luckily, when the application is containerized, it's actually relatively simple. With multiple application containers, you get horizontal scaling and a much-needed redundancy for a very little price. Thus, if there is a sudden need for handling more requests, you can adjust the number of containers accordingly. And if one of the containers dies, there are others to handle its traffic share, so your app isn't a SPOF anymore.

The tricky part here is how to expose such a multi-container application to the clients. Multiple containers mean multiple listening sockets. But most of the time, clients just want to have a single point of entry.

Surprisingly or not, neither Docker nor Podman support exposing multiple containers on the same host's port right out of the box.

The most widely suggested workaround is to use an extra container with a reverse proxy like Nginx, HAProxy, Envoy, or Traefik. Such a proxy should know the exact set of application containers and load balance the client traffic between them. The only port that needs to be exposed on the host in such a setup is the port of the proxy itself. Additionally, since modern reverse proxies usually come with advanced routing capabilities, you can get canary and blue-green deployments or even coalesce diverse backend apps into a single fronted app almost for free.

For any production setup, I'd recommend going with a reverse proxy approach first. But in this post, I want to explore the alternatives. Are there other ways to expose multiple Docker or Podman containers on the same host's port?

The goal of the below exercise is manifold. First of all, to solidify the knowledge obtained while working on my container networking and iptables write-ups. But also to show that the proxy is not the only possible way to achieve a decent load balancing. So, if you are in a restricted setup where you can't use a proxy for some reason, the techniques from this post may come in handy.

Let's forget about containers for a second and talk about sockets in general.

To make a server socket listen() on a certain address, you need to explicitly bind() it to an interface and port. For a long time, binding a socket to an (interface, port) pair was an exclusive operation. If you bound a socket to a certain address from one process, no other processes on the same machine would be able to use the same address for their sockets until the original process closes its socket (hence, releases the port). And it's kind of reasonable behavior - an interface and port define a packet destination on a machine. Having ambiguous receivers would be bizarre.

But... modern servers may need to handle tens of thousands of TCP connections per second. A single process accept()-ing all the client connections quickly becomes a bottleneck with such a high connection rate. So, starting from Linux 3.9, you can bind an arbitrary number of sockets to exactly the same (interface, port) pair as long as all of them use the SO_REUSEPORT socket option. The operating system then will make sure that TCP connections are evenly distributed between all the listening processes (or threads).

Apparently, the same technique can be applied to containers. However, the SO_REUSEPORT option works only if all the sockets reside in the same network stack. And that's obviously not the case for the default Docker/Podman approach, where every container gets its own network namespace, hence an isolated network stack.

The simplest way to overcome this is to sacrifice the isolation a bit and run all the containers in the host's network namespace with docker run --network host: 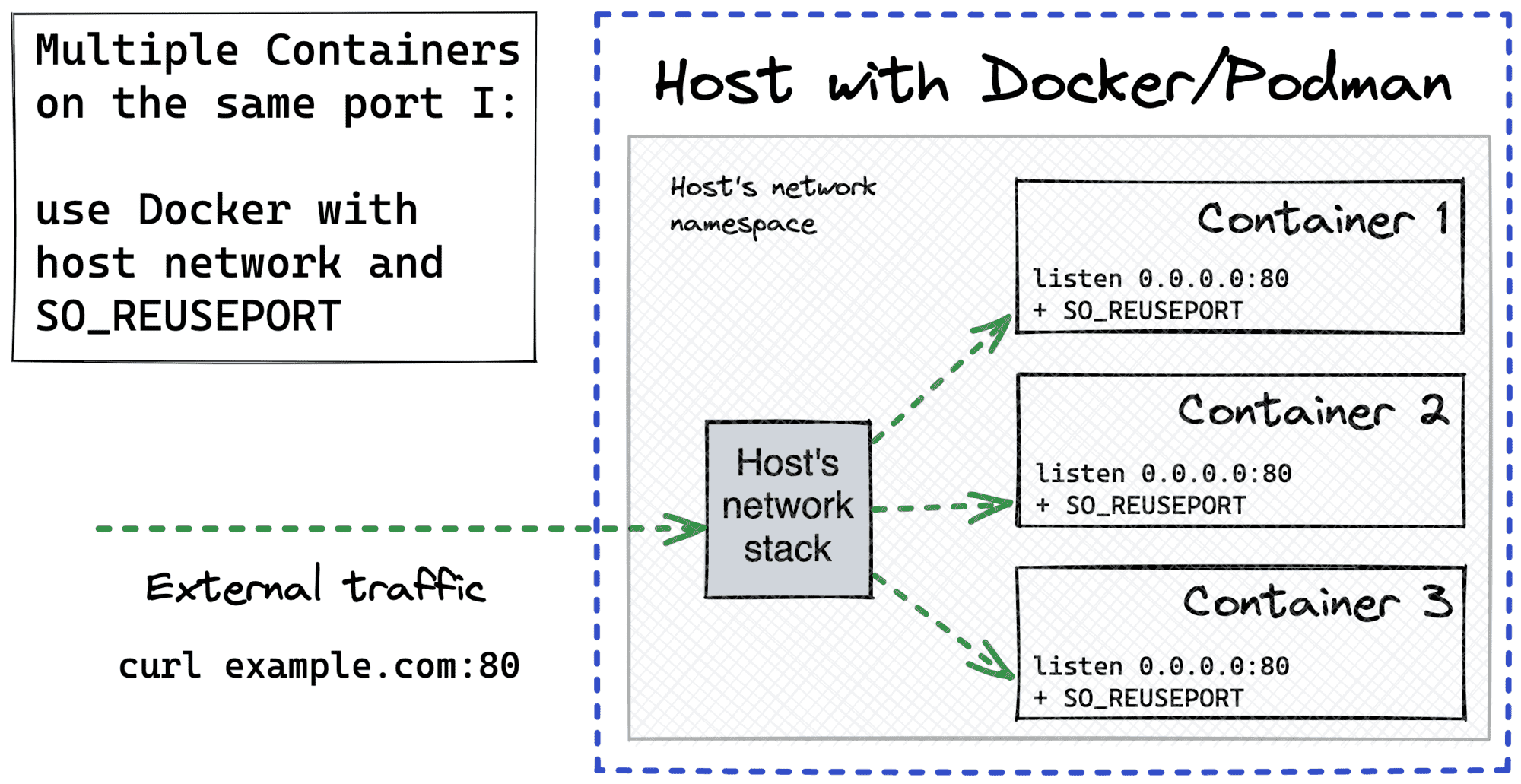 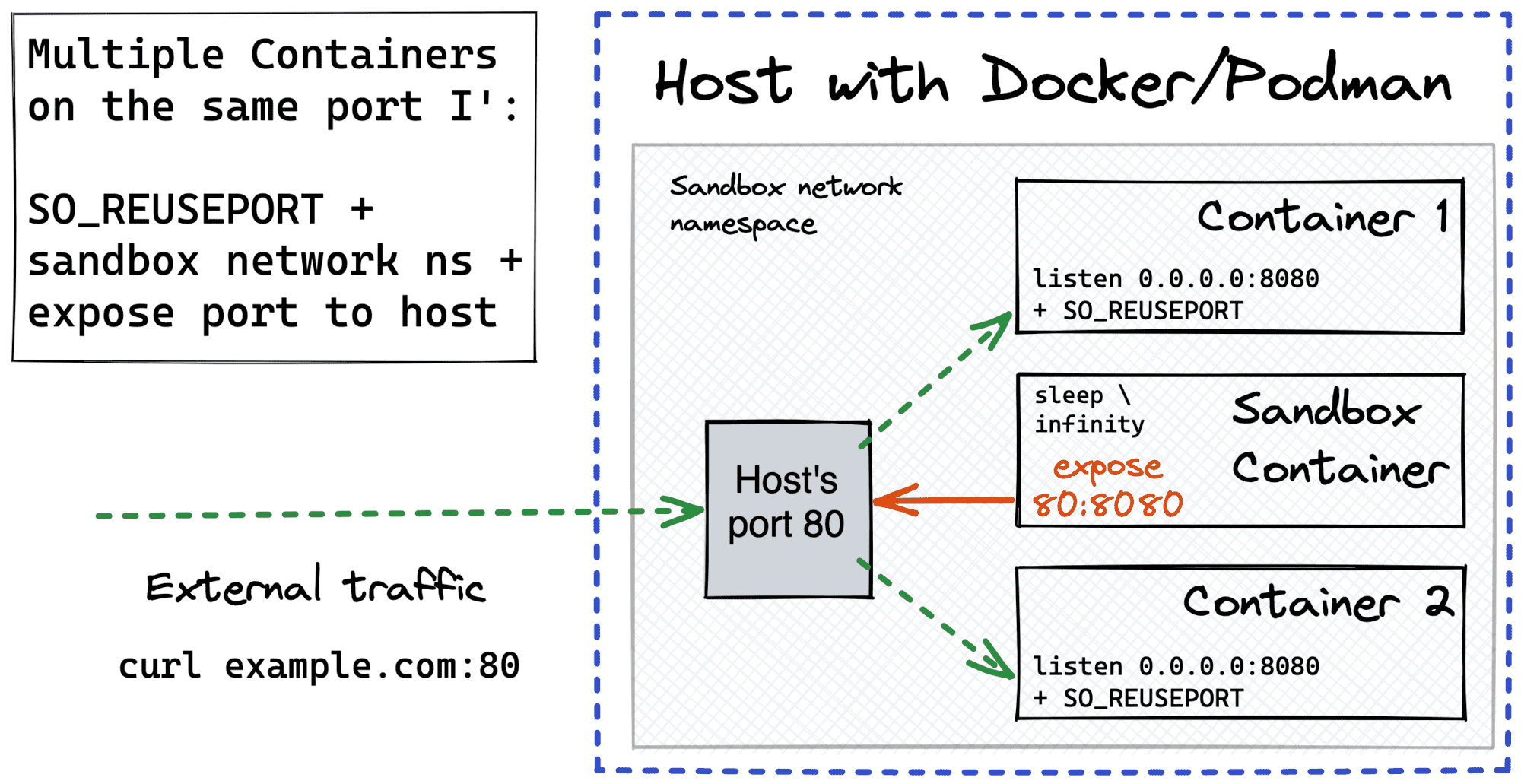 Of course, all the instances of the application server need to set the SO_REUSEPORT option, so there won't be a port conflict, and the incoming requests will be evenly distributed between the containers listening on the same port.

Here is a step by step instruction on how to launch the sandbox and the application containers:

Testing it on a vagrant box with curl gave me the following results:

To understand the technique from this section, you need to know what happens when a container's port is published on the host. At first sight, it may look like there is indeed a process listening on the host and forwarding packets to the container (scroll to the right end):

In actuality, the userland docker-proxy is rarely used. Instead, a single iptables rule in the NAT table does all the heavy lifting. Whenever a packet destined to the (host, published_port) arrives, a destination address translation to (container, target_port) happens. So, the port publishing boils down to adding this iptables rule upon the container startup.

NB: The iptables trick doesn't cover all the scenarios - for instance, traffic from localhost cannot be NAT-ed. So the docker-proxy is not fully useless.

The problem with the above DNAT is that it can do only the one-to-one translation. Thus, if we want to support multiple containers behind a single host's port, we need a more sophisticated solution. Luckily, Kubernetes uses a similar trick in kube-proxy for the Service ClusterIP to Pod IPs translation while implementing a built-in service discovery.

Long story short, iptables rules can be applied with some probability. So, if you have ten potential destinations for a packet, try applying the destination address translation to the first nine one of them with just a 10% chance. And if none of them worked out, apply a fallback for the very last destination with a 100% chance. As a result, you'll get ten equally loaded destinations.

NB: Of course, iptables are smart enough to apply the DNAT only to the new connections. For an already established connection, an existing address mapping is looked up on the fly. 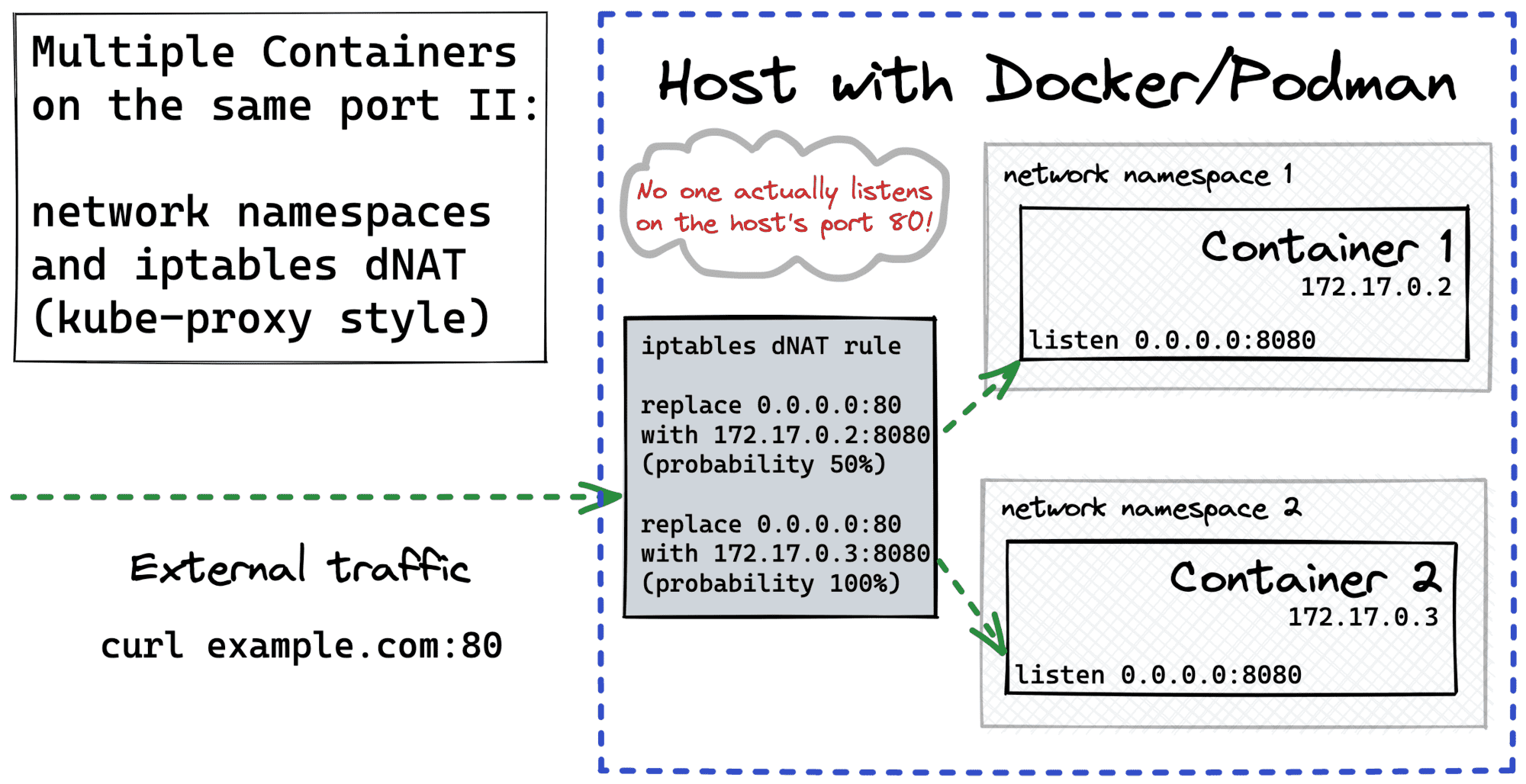 The huge advantage of this approach comparing to the SO_REUSEPORT option is that it's absolutely transparent to the application.

Here is how you can quickly try it out.

Figure out the IP addresses of the containers:

Testing it on a vagrant box game with curl gave me the following request distribution:

When it comes to proxies, the most challenging part is how to deal with volatile sets of upstreams. Containers come and go, and their IP addresses are ephemeral. So, whenever a list of application containers changes, the proxy needs to update its list of upstream IPs. Docker has a built-in DNS server that maintains the up-to-date DNS records for the containers. However, Nginx doesn't refresh the DNS resolution results unless some magic with variables is applied. Configuring Envoy proxy with a STRICT_DNS cluster may show better results. However, the best results can be achieved only by dynamically updating the proxy configuration on the fly listening to Docker events. 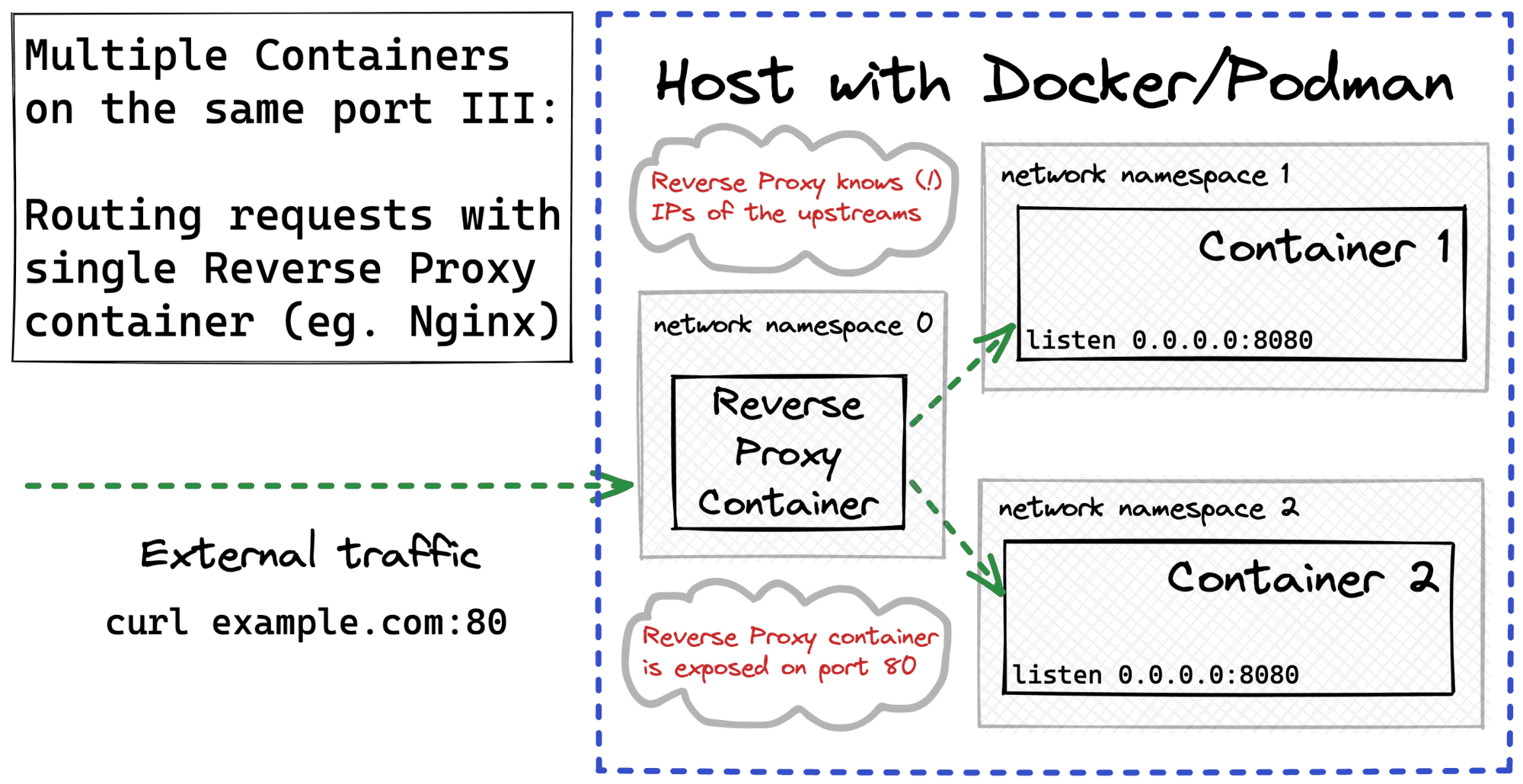 Luckily, there is a more modern proxy called Traefik with built-in support for many service discovery mechanisms, including labeled Docker containers. If you want to see Traefik in action, check out my write-up on canary container deployments.

Well, that's it for now. Make code, not war!