The only "official" way to publish a port in Docker is the -p|--publish flag of the docker run (or docker create) command. And it's probably for good that Docker doesn't allow you to expose ports on the fly easily. Published ports are part of the container's configuration, and the modern infrastructure is supposed to be fully declarative and reproducible. Thus, if Docker encouraged (any) modification of the container's configuration at runtime, it'd definitely worsen the general reproducibility of container setups.

But what if I really need to publish that port?

For instance, I periodically get into the following trouble: there is a containerized Java web service that takes (tens of) minutes to start up, and I'm supposed to develop/debug it. I launch a container and go grab some coffee. But when I'm back from the coffee break, I realize that I forgot to expose port 80 (or 443, or whatever) to my host system. And the browser is on the host...

There are two (quite old) StackOverflow answers (1, 2) suggesting a bunch of solutions:

Container port publishing is a form of port forwarding, i.e., good old socket address redirection. It can be implemented with either modification of the packet's destination address (on L3) or by using an intermediary proxy process forwarding only the payload data: 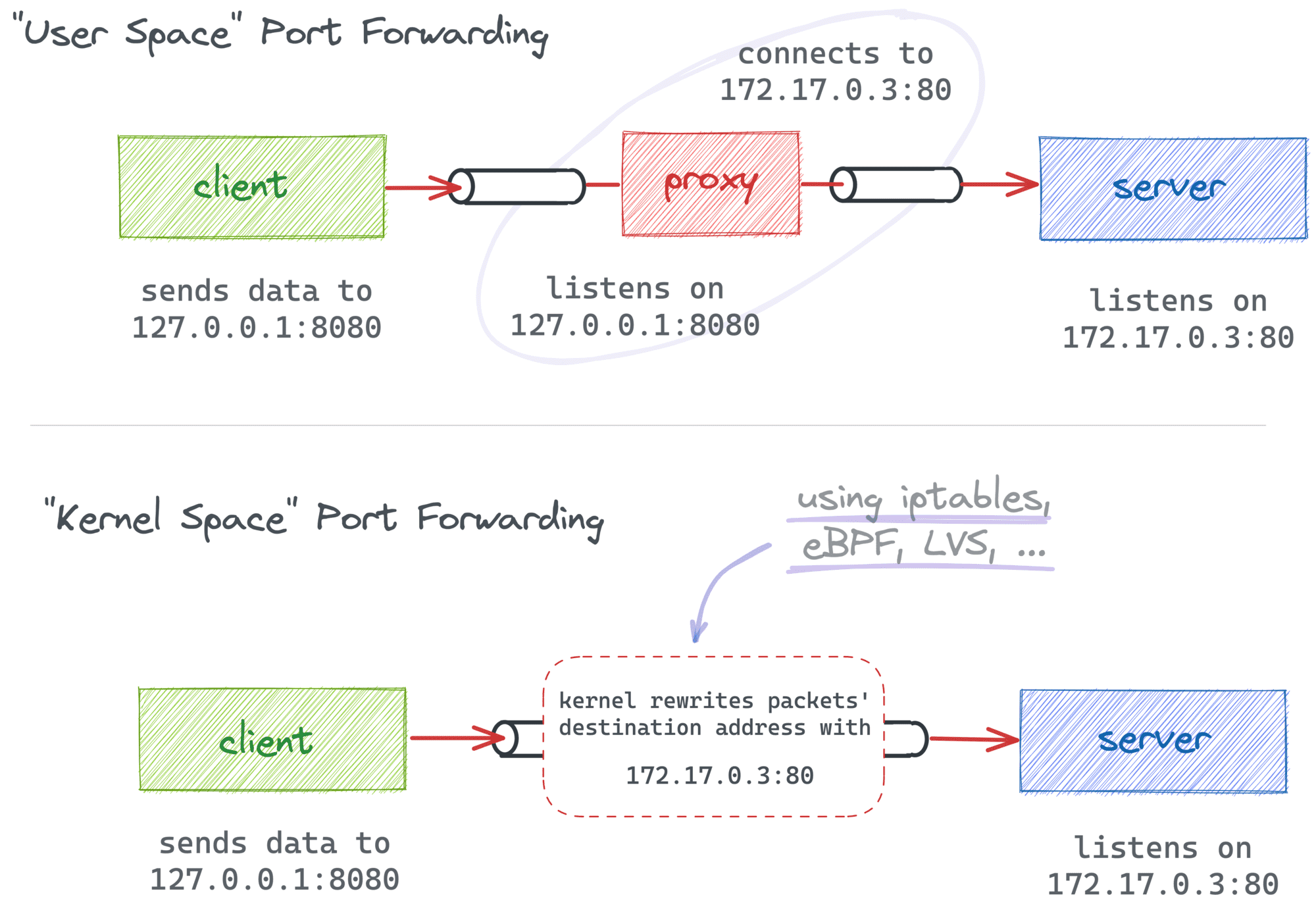 In the case of Docker port publishing, it's actually a combination of both approaches. Traditionally, Docker Engine relies on in-kernel packet modification (with iptables rules), while Docker Desktop adds a higher-level proxy on top of that, making the implementation work on non-Linux systems too: 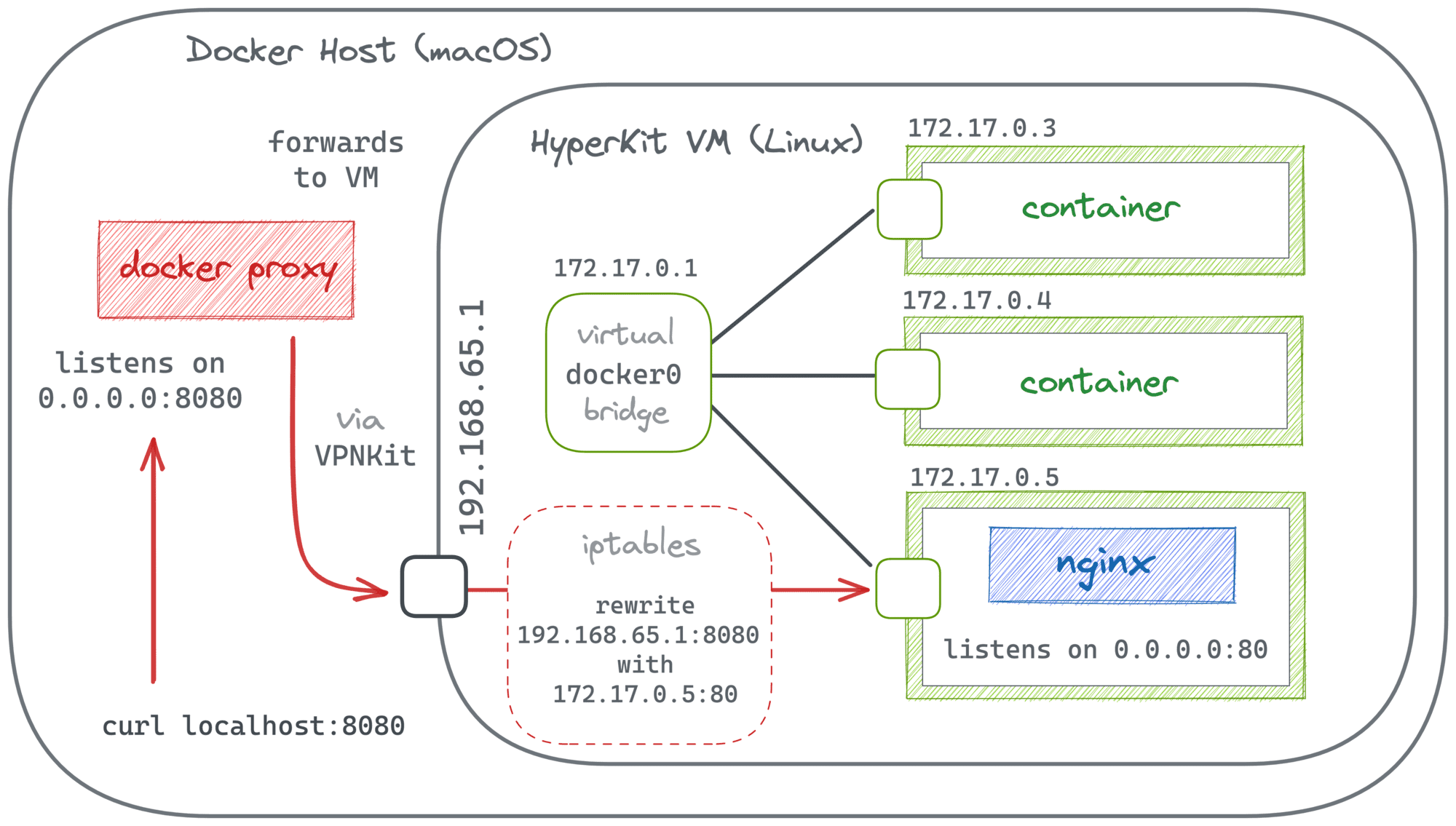 Last but not least, for that "proxy" solution to work, we should be able to start a new container that can talk to the target container (using its IP address). But this is generally not a problem when both containers reside in the same Docker network.

The trick is to start a new auxiliary container attached to the same network the target container resides in and ask Docker to publish one (or many) of its ports. It does not establish immediate connectivity with the target's port. However, we can create it by launching a tiny proxy process inside of the container we just launched that will be forwarding not network packets but the actual data: 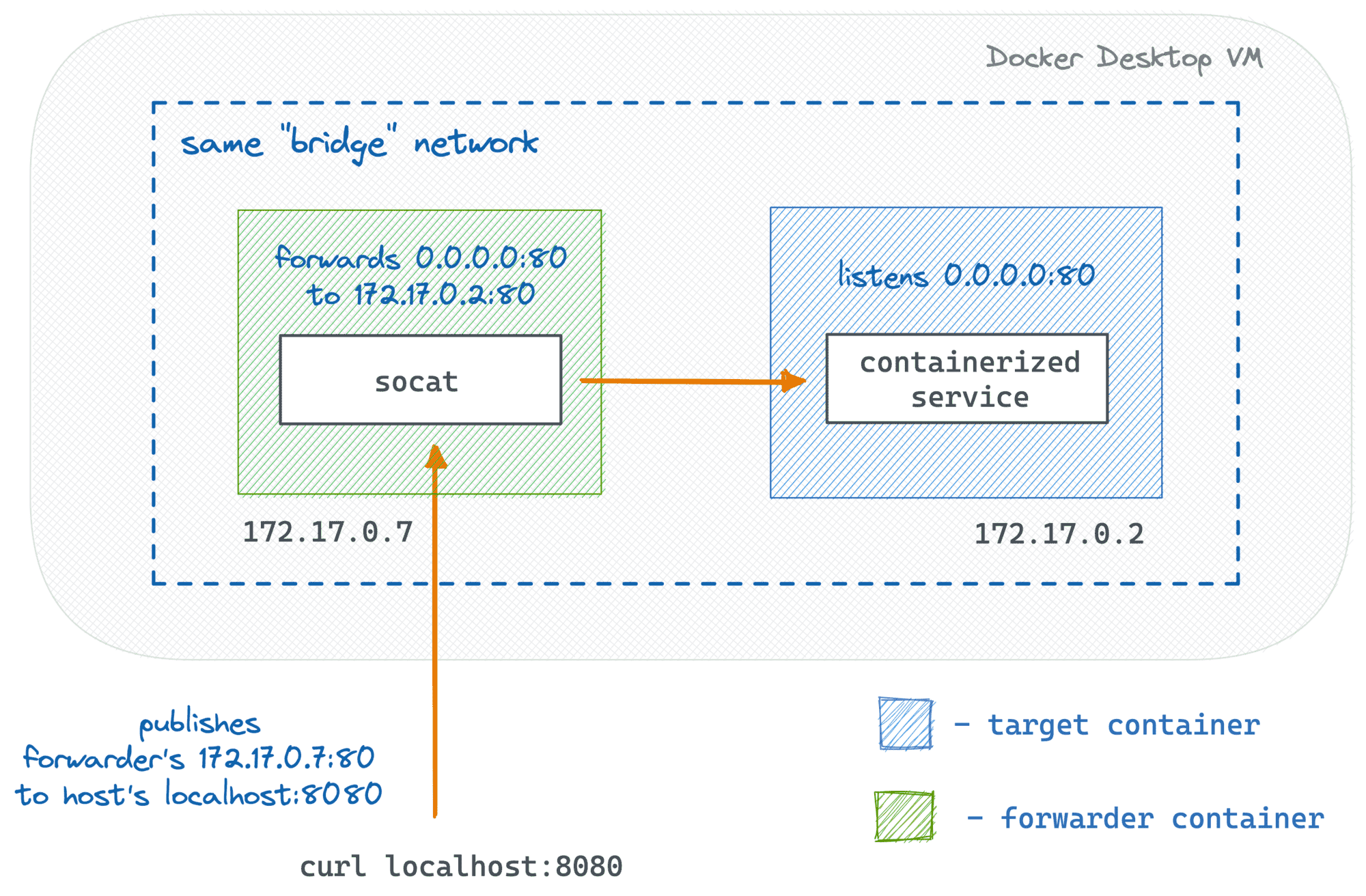 Let's try to reproduce this experiment. First, we'll need to start the target container. For simplicity, I'll use nginx (it listens on 0.0.0.0:80 inside of the container):

Now, we need to get the target's IP address and the network name:

Finally, let's start the forwarder container with a tiny socat program inside:

For me, this solution has two significant advantages:

It means the solution will work in Docker Engine, Docker Desktop, and even with Docker Compose.

The Docker Compose compatibility is actually very handy. Often, in a multi-service setup, you'll have only the "public" services' port mapped. So, next time you'll need to access a helper service like a database from the host system, feel free to apply this trick and map those ports without restarting the whole compose file.

The downside of the solution is that it requires a few extra steps. You need to determine the target's IP and network name, come up with a simple but correct socat program, launch the forwarder container, etc.

At the same time, when automated, the solution can be really fast and handy. And it's generic enough to be used with other container runtimes too, including containerd and Kubernetes. So, I ended up writing a special port-forward command for my experimental container debugging tool:

Go give it a try!