There are many ways to create containers, especially on Linux and alike. Besides the super widespread Docker implementation, you may have heard about LXC, systemd-nspawn, or maybe even OpenVZ.

The general concept of the container is quite vague. What's true and what's not often depends on the context, but the context itself isn't always given explicitly. For instance, there is a common saying that containers are Linux processes or that containers aren't Virtual Machines. However, the first statement is just an oversimplified attempt to explain Linux containers. And the second statement simply isn't always true.

In this article, I'm not trying to review all possible ways of creating containers. Instead, the article is an analysis of the OCI Runtime Specification. The spec turned out to be an insightful read! For instance, it gives a definition of the standard container (and no, it's not a process) and sheds some light on when Virtual Machines can be considered containers.

Disclaimer: In 2021, there is still a place for simple setups with just one machine serving all traffic. So, no Kubernetes and no cloud load balancers in this post. Just good old Docker and Podman.

Even when you have just one physical or virtual server, it's often a good idea to run multiple instances of your application on it. Luckily, when the application is containerized, it's actually relatively simple. With multiple application containers, you get horizontal scaling and a much-needed redundancy for a very little price. Thus, if there is a sudden need for handling more requests, you can adjust the number of containers accordingly. And if one of the containers dies, there are others to handle its traffic share, so your app isn't a SPOF anymore.

The tricky part here is how to expose such a multi-container application to the clients. Multiple containers mean multiple listening sockets. But most of the time, clients just want to have a single point of entry. 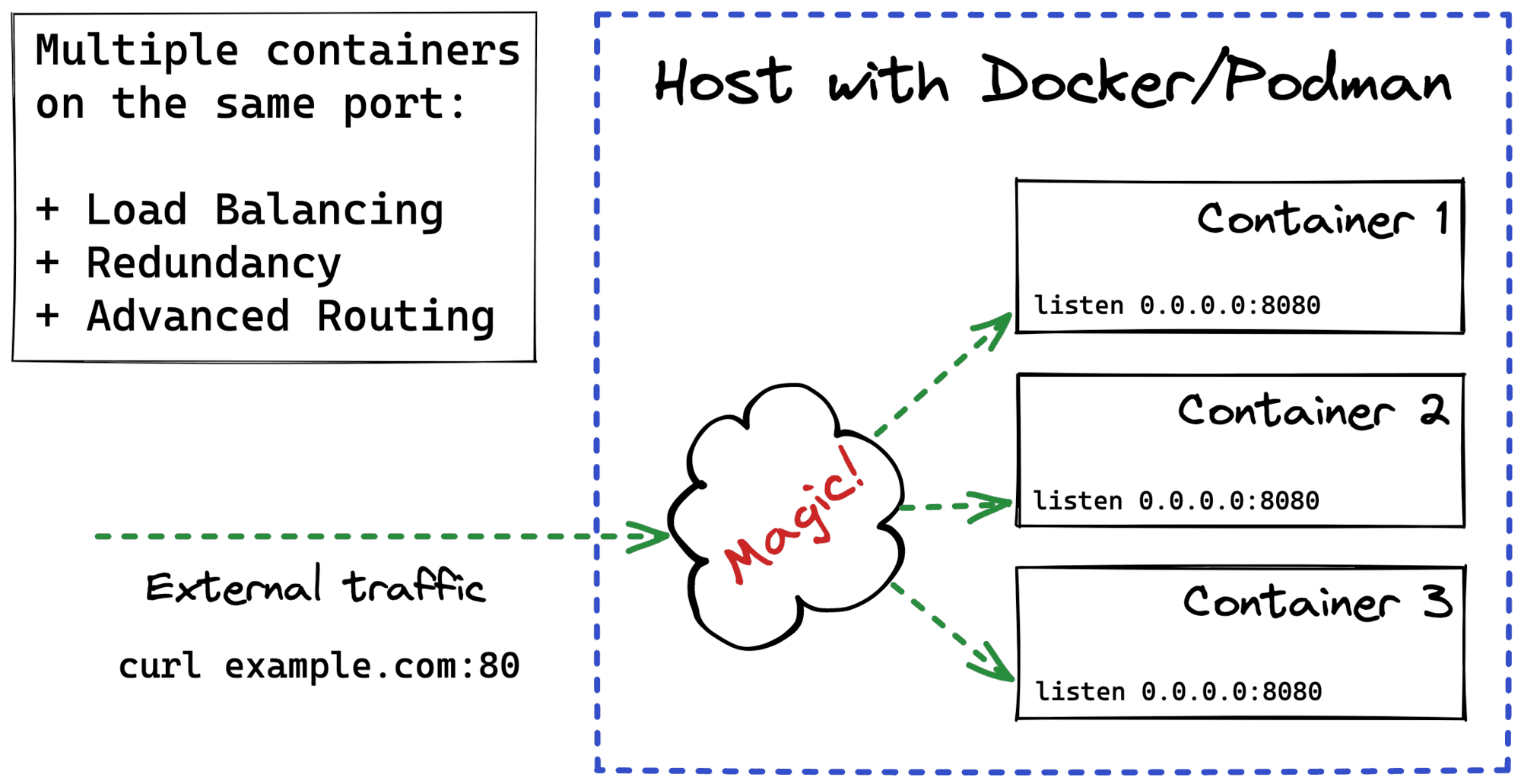 I use a (rather oldish) MacBook for my day-to-day development tasks. But I prefer keeping my host operating system free of development stuff. This strategy has the following benefits:

Since I usually work on several projects at the same time, I need not one but many isolated development environments. And every environment should be project-tailored, easy to spin up, suspend, and, eventually, dispose. I figured a way to achieve that by using only a few tools installed on my host operating system, and I'm going to share it here.

The approach may be helpful for folks using macOS or Linux:

I was hacking containers recently and noticed, that Docker started featuring the docker scan command in the docker build output. I've been ignoring its existence for a while, so evidently, it was time to finally try it out.

The docker scan command uses a third-party tool, called Snyk Container. Apparently, it's some sort of a vulnerability scanner. So, I decided, mostly for the sake of fun, to scan one of my images. And it just so happened that it was a fairly basic thing:

I ran docker build -t python-flask . and then docker scan python-flask. To my utter surprise, the output was huge! Here is just an excerpt:

Just kidding, it's not... But fear not and read on!

You can find a Russian translation of this article here.

Working with containers always feels like magic. In a good way for those who understand the internals and in a terrifying - for those who don't. Luckily, we've been looking under the hood of the containerization technology for quite some time already and even managed to uncover that containers are just isolated and restricted Linux processes, that images aren't really needed to run containers, and on the contrary - to build an image we need to run some containers.

And for better or worse, no code is required to make the networking magic happen...