You've probably already seen or even used many of the Docker container management commands (likely in their shorter form):

But have you ever wondered why some of the commands resemble typical process management operations while others look more like file management commands? 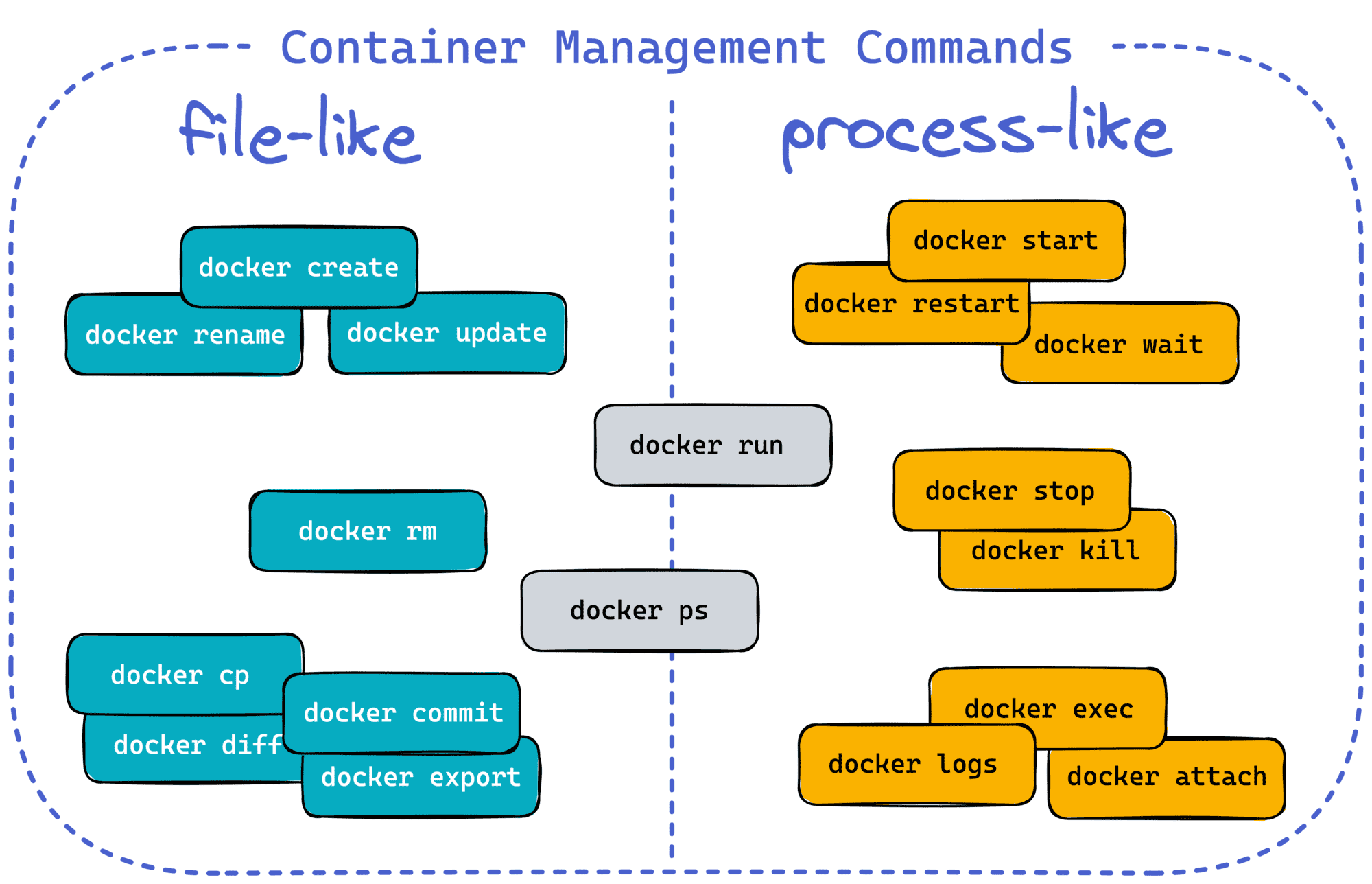 This process-file duality might not make much sense for the followers of the "containers are just Linux processes" mantra. And that is yet another reason why I prefer a different analogy - in my opinion, the abstraction becomes less leaky when you start thinking of containers as of isolated and restricted execution environments for processes: 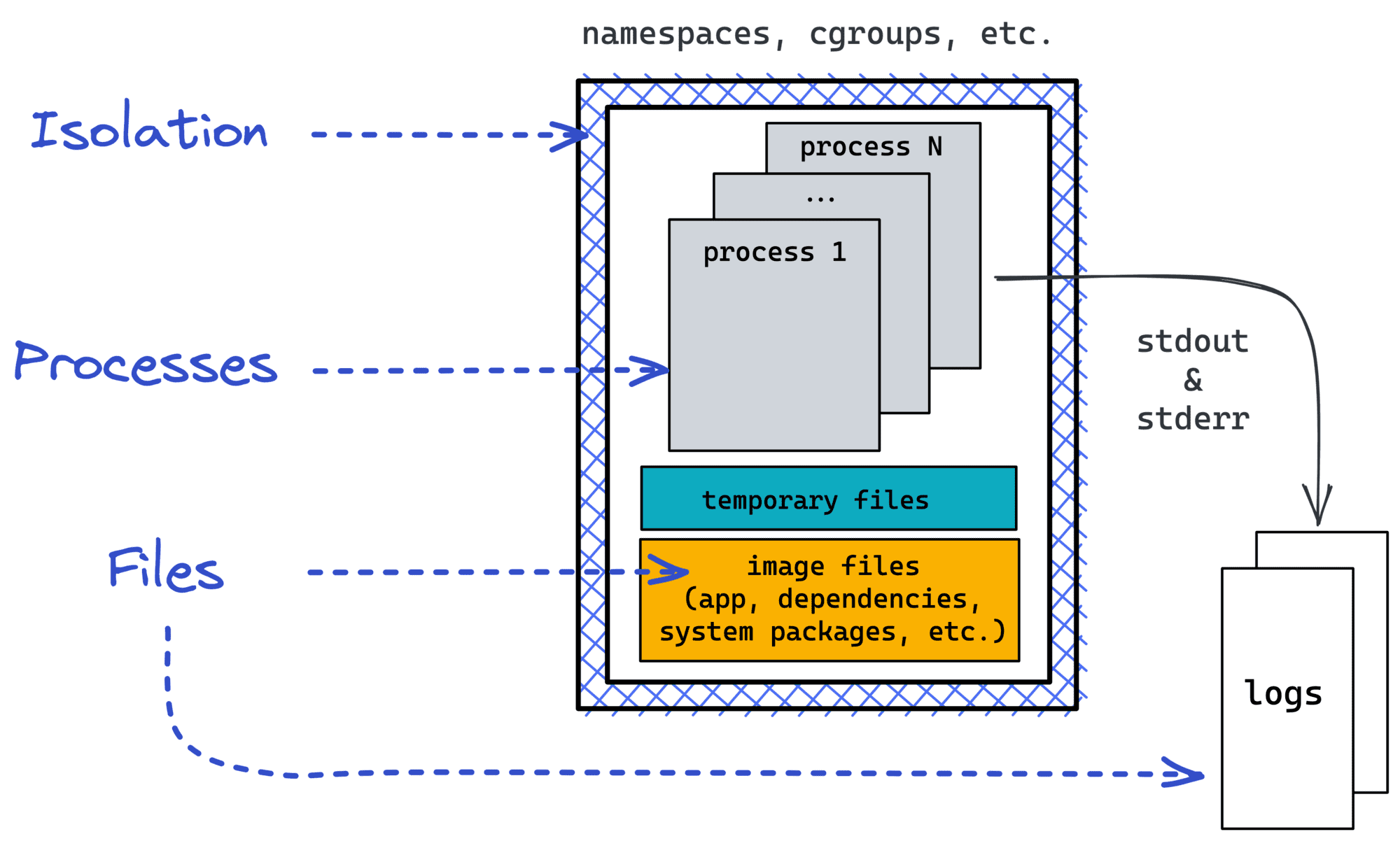 So, when it comes to managing such environments, you need to have commands to deal with all the parts and not just the processes. Don't fall victim to Docker trying hard to make containers look like processes by promoting its deceptive docker run UX. What was it, Docker? Marketing taking over good engineering practices?

To get a container running, you need to have its files around first. Typically, containers live on disk at /var/lib/docker/containers/<CONTAINER-ID>. The docker create <IMAGE> [COMMAND] [ARG...] command creates a dedicated container subfolder at the said location with the supplied (or default, or defined by the image) container configs. It may also pull the specified image, but it'll not start any processes, so it'll return the control as soon as all the preparations are done. Comparing to docker run, this command is much better scoped!

Well, probably if you changed your mind after creating a container, you can update its configs on disk without re-creating the container. Haven't seen these commands used in the wild...

If the container(ized process) is running in the background, you may want to know when it exits. For that, there is the docker wait <CONTAINER> command. It'll block your terminal until the container(ized process) terminates and then print out its exit code. Kinda similar to man 2 wait call. If you run this command for a stopped (or not started yet) container, it'll exit immediately, reporting the saved container exit code (or 0).

Two very similar commands - they both send signals to the containerized process, potentially with an intention to terminate it. Notice how the separation of processes from execution environments allows a container to outlive its process(es). In particular, because container configs, rootfs, and logs are kept on disk. So, you can always restart a stopped (or killed, or unexpectedly exited container). Well, unless you haven't used the --rm flag on the docker create step 😉

Another deceptive one! The shortcut form of this command (docker ps) and its default behavior (listing only running containers) reinforces the belief that containers are just processes. However, if you run it with the -a flag, it'll list all (including created and not started or stopped and not removed yet) containers. Kinda, a fancy way to list all subfolders of /var/lib/docker/containers.

If docker ps is a way to list subfolders of /var/lib/docker/containers, the docker rm <CONTAINER> command is a way to remove them.

I hope by now, the distinction between containers from processes is already apparent. So, it's time to tackle the docker run command.

If we can create, start, wait, and stop containers using the above commands, what the docker run <IMAGE> [COMMAND] [ARG...] command is for? Well, it's just another shortcut! You can think of docker run as of a combination of docker create and docker start. It's a handy way to run a command, always in a new container.

What if you need to run a command in an existing (and already running) container? This slightly more advanced use case is solved by the docker exec command. And since the UX of docker exec is very similar to docker run, these two commands are often confused: 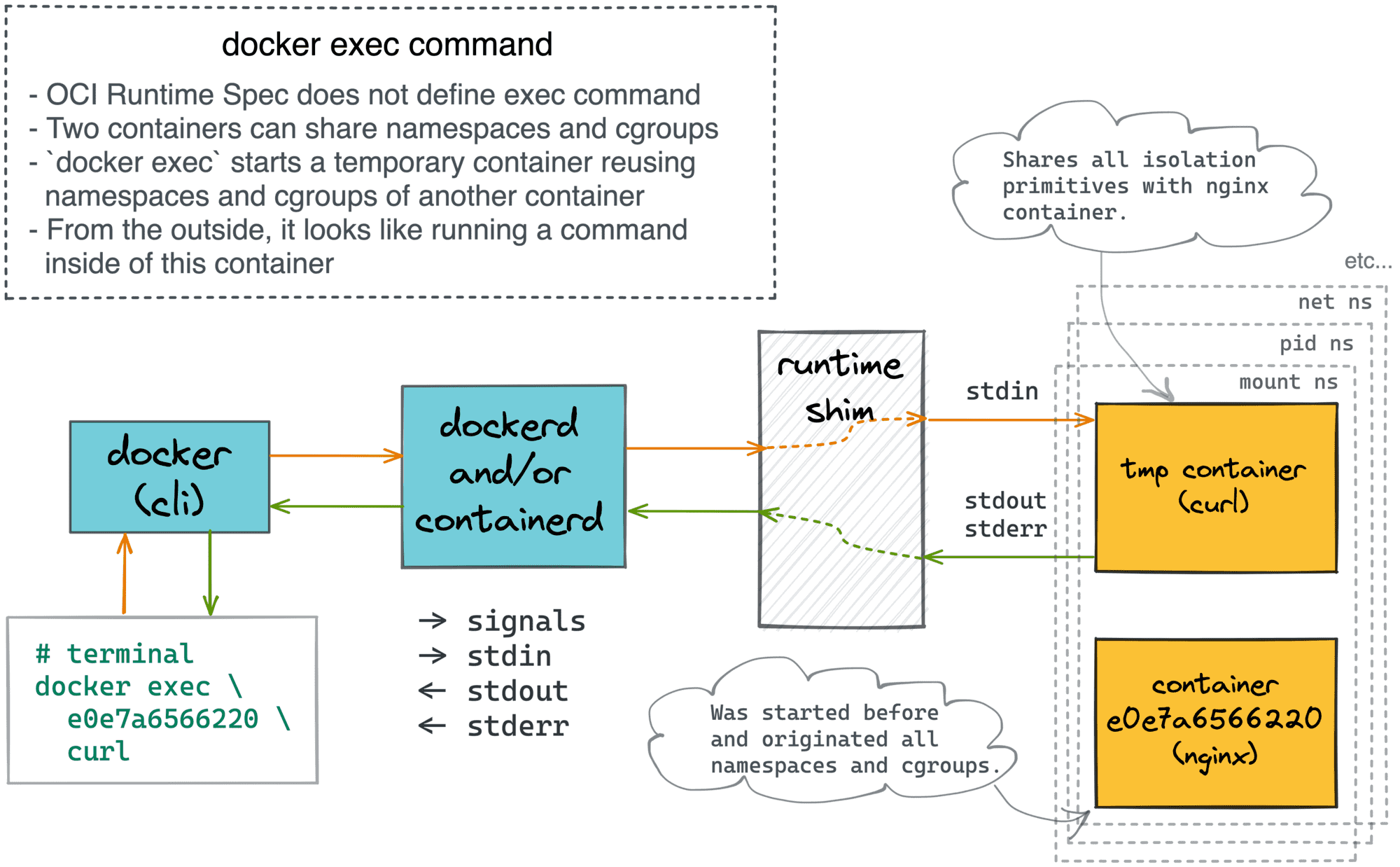 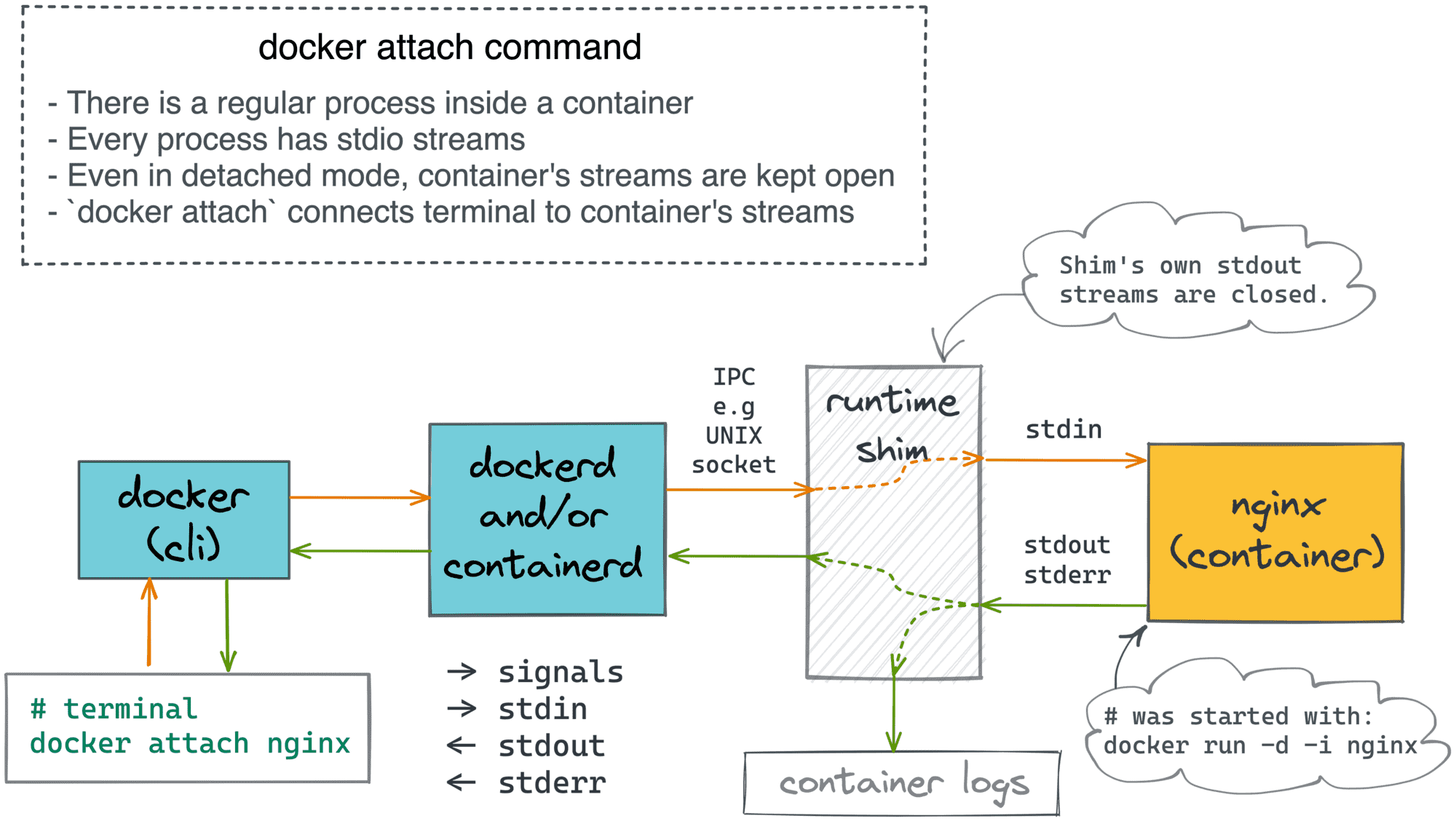 You can always read more about the docker attach and docker exec commands here:

The last group of commands I'll touch upon here is a bit different but still falls under the container management section. The docker cp, docker diff, docker commit, and docker export commands are concerned solely with the running container root filesystem and not with the container's files on the host system.

Every running container has its own rootfs based on the Copy-on-Write snapshot of its image. A container(ized) process can make changes to the rootfs (using standard file manipulations), and with docker diff <CONTAINER> you can quickly compare the current state of this filesystem with the container's original image.

If, for some reason, you want to persist the current state of the container's rootfs as another image, you can use the docker commit <CONTAINER> <IMAGE> command.

If you feel like you need a copy of a file from inside of a container on your host system, you can use docker cp <CONTAINER>:<SRC_PATH> <DEST_PATH>. This command also works in the inverse direction using the docker cp <SRC_PATH> <CONTAINER>:<DST_PATH> syntax.

Run a vanilla base container (e.g., docker run -it debian bash), install something in there (apt-get install ...), and create an image layer with docker commit. Then copy your application (and dependencies) into the running container using docker cp, and commit it again. Sounds familiar? Right, that's how docker build could be emulated! Intrigued? Then check out the podman and buildah projects 😉

Last but not least, you can always export the current state of the container's rootfs as a tar archive using the docker export <CONTAINER> command.

Seek to understand things and not just memorize. Memorization can be more efficient in the short run, but in the long run, understanding is superior because it allows you to draw the dots between different ideas and extrapolate the knowledge.

Enjoyed the article? Then you may like these ones as well!