May 29, 2022
Kubernetes,Containers
Debugging Containers Like a Pro
Learning Series

So, below are my findings - traditionally sprinkled with a bit of containerization theory and practice 🤓

TL;DR: Ephemeral containers are indeed great and much needed. The fastest way to get started is the kubectl debug command. However, this command might be tricky to use if you're not container-savvy.

The Need For Ephemeral Containers

How to debug Kubernetes workloads?

So, what other debugging options do we have given the immutability of the Pod's spec?

There is, of course, debugging right from a cluster node, but SSH access to the cluster might be off-limits for many of us. Well, probably there is not so many options left...

Unless we can relax a bit the Pod immutability requirement!

What if new (somewhat limited) containers could be added to an already running Pod without restarting it? Since Pods are just groups of semi-fused containers and the isolation between containers in a Pod is weakened, such a new container could be used to inspect the other containers in the (acting up) Pod regardless of their state and content.

And that's how we get to the idea of an Ephemeral Container - "a special type of container that runs temporarily in an existing Pod to accomplish user-initiated actions such as troubleshooting."

Now, when the theory is clear, it's time for a little practice!

Kubernetes adds support for ephemeral containers by extending the Pod spec with the new attribute called (surprise, surprise!) ephemeralContainers. This attribute holds a list of Container-like objects, and it's one of the few Pod spec attributes that can be modified for an already created Pod instance.

Adding elements to the ephemeralContainers list makes new containers (try to) start in the existing Pod. The EphemeralContainer spec has a substantial number of properties to tweak. In particular, much like regular containers, ephemeral containers can be interactive and PTY-controlled, so that the subsequent kubectl attach -it execution would provide you with a familiar shell-like experience.

For a guinea-pig workload I'll use a basic Deployment with two distroless containers (Python for the main app and Node.js for a sidecar):

If, or rather when, such a Deployment starts misbehaving, there will be very little help from the kubectl exec command since distroless images usually lack even the basic exploration tools.

The above command adds to the target Pod a new ephemeral container called debugger that uses the busybox:latest image. I intentionally created it interactive (-i) and PTY-controlled (-t) so that attaching to it later would provide a typical interactive shell experience.

Here is the impact of the above command on the Pod spec:

If the ephemeral container is running, we can try attaching to it:

But there is actually a problem:

The ps output from inside of the debugger container shows only the processes of that container... So, kubectl debug just gave me a shared net (and probably ipc) namespace, likely the same parent cgroup as for the other Pod's containers, and that's pretty much it! Sounds way too limited for a seamless debugging experience 🤔 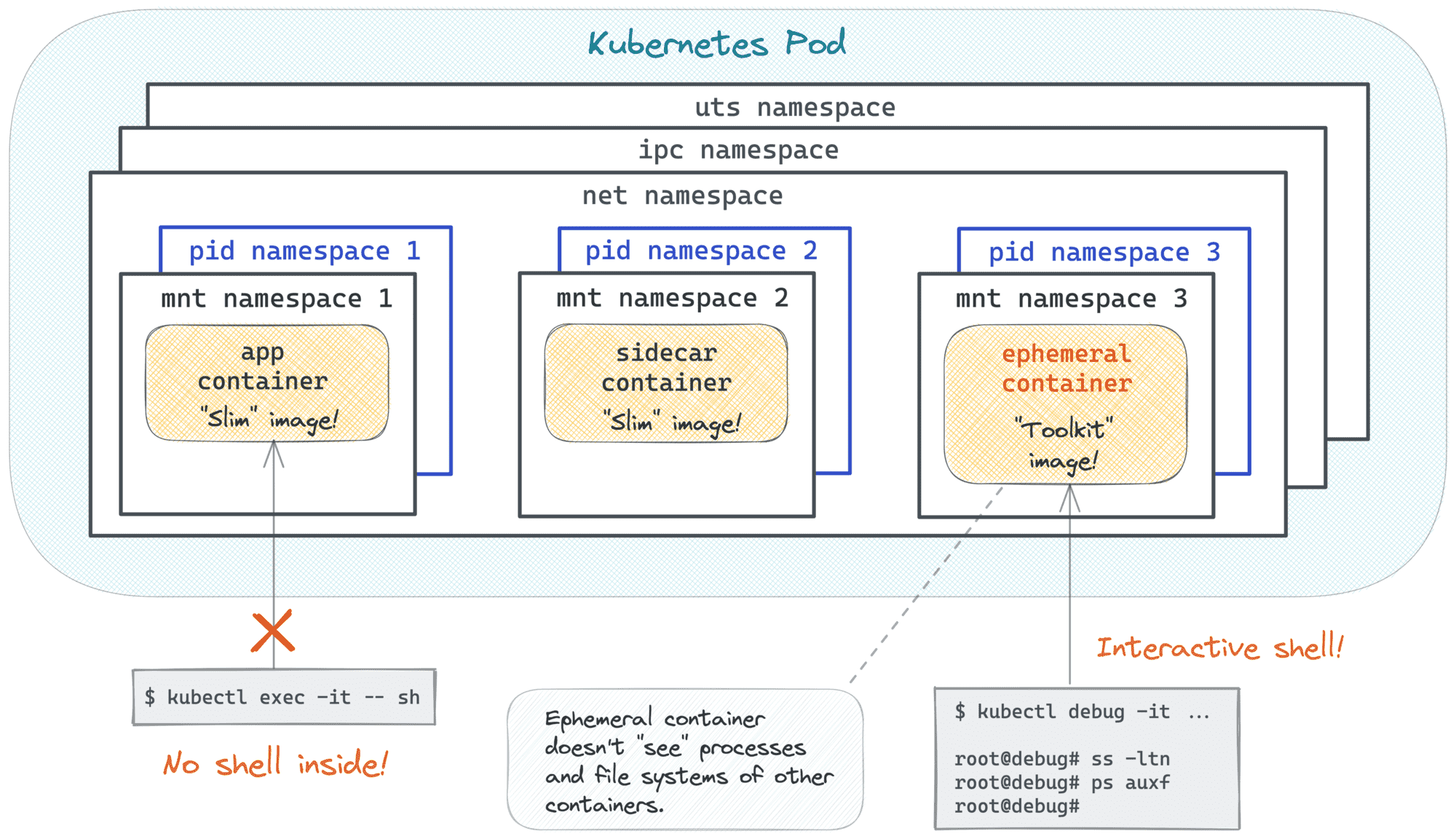 While troubleshooting a Pod, I'd typically want to see the processes of all its containers, as well as I'd be interested in exploring their filesystems. Can an ephemeral container be a little more unraveling?

Interesting that the official documentation page mentions specifically this problem! It also offers a workaround - enabling a shared pid namespace for all the containers in a Pod.

It can be done by setting the shareProcessNamespace attribute in the Pod template spec to true:

Looks better! It feels much closer to debugging experience on a regular server where you'd see all the processes running in one place. 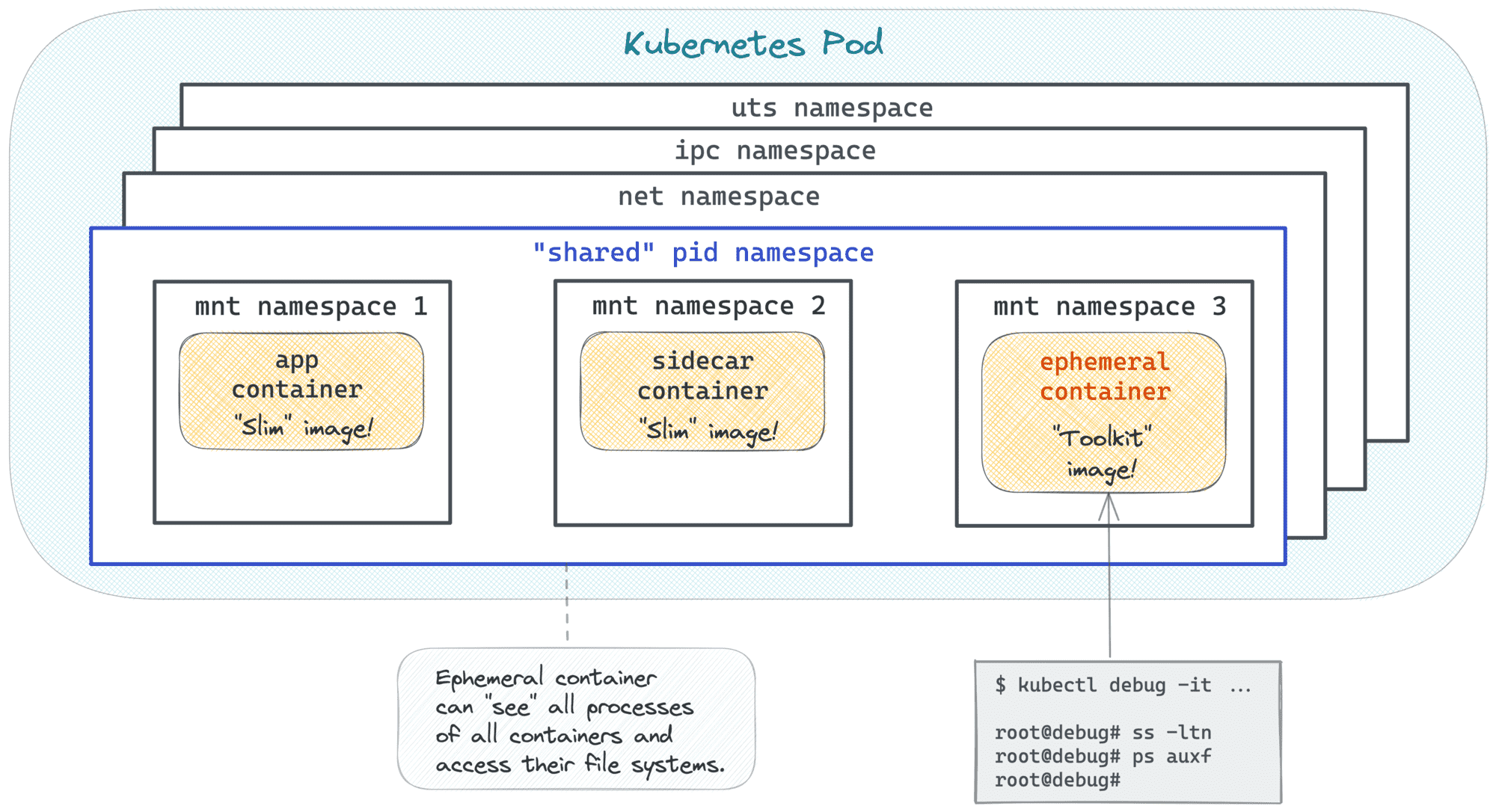 However, if you explore the filesystem with ls, you'll notice that it's a filesystem of the ephemeral container itself (busybox in our case), and not of any other container in the Pod. Well, it makes sense - containers in a Pod (typically) share net, ipc, and uts namespaces, they can share the pid namespace, but they never share the mnt namespace. Also, filesystems of different containers always stay independent. Otherwise, all sorts of collisions would start happening.

Nevertheless, while debugging, I want to have CRUD-like access to the misbehaving container filesystem! Luckily, there is a trick:

Thus, if you know a PID of a process from the container you want to explore, you can find its filesystem at /proc/<PID>/root from inside the debugging container.

But all magic always comes with a price... Changing the shareProcessNamespace attribute actually cost us a rollout!

Much like most of the other Pod spec attributes, changing shareProcessNamespace leads to a Pod re-creation. And changing it on the Deployment's template spec level actually causes a full-blown rollout, which might be an unaffordable price for a happy debugging session. But even if you're fine with it, restarting Pods for debugging, in my eyes, defeats the whole purpose of having ephemeral containers capability - they were supposed to be injected without causing Pod disruption.

So, unless your workloads run with shareProcessNamespace enabled by default (which is unlikely a good idea since it reduces the isolation between containers), we still need a better solution.

However, technically, it still should be possible to start a container that would share a pid namespace of a particular Pod's container!

👉 You can read more about the technique here.

Actually, the Kubernetes CRI Spec specifically mentions this possibility for Pods (overall, it's an insightful read, do recommend!):

And indeed, a more thorough look at the kubectl debug --help output revealed the --target flag that I missed for some reason during my initial acquaintance with the command:

Well, apparently my runtime (containerd + runc) does support this feature 😊 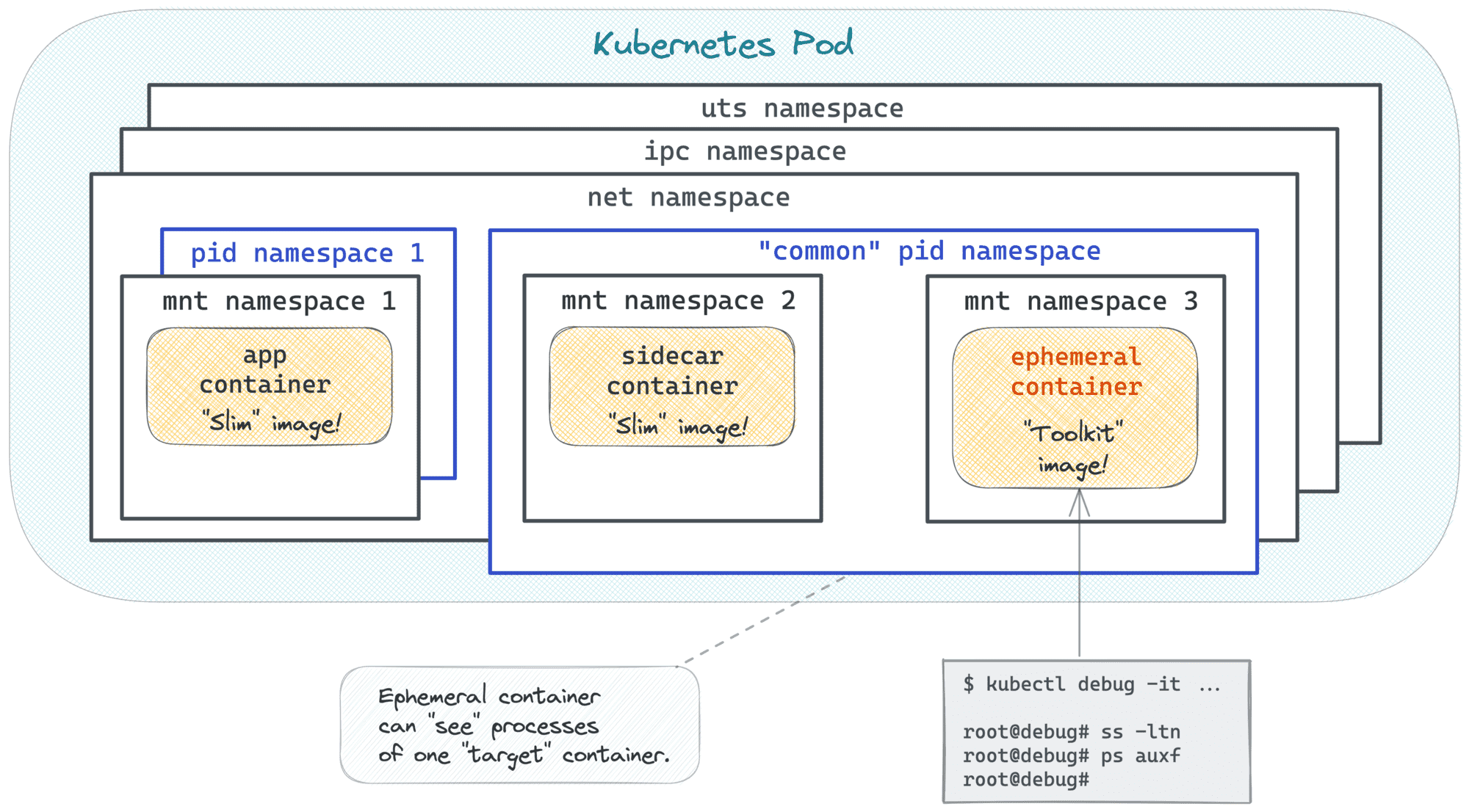 While targeting a specific container in a misbehaving Pod would probably be my favorite option, there is another kubectl debug mode that's worth covering.

Sometimes, it might be a good idea to copy a Pod before starting the debugging. Luckily, the kubectl debug command has a flag for that --copy-to <new-name>. The new Pod won't be owned by the original workload, nor will it inherit the labels of the original Pod, so it won't be targeted by a potential Service object in front of the workload. This should give you a quiet copy to investigate!

And since it is a copy, the shareProcessNamespace attribute can be set on it without causing any disruption for the production Pods. However, that would require another flag --share-processes:

This is how the playground cluster would look like after the above command is applied to a fresh Deployment:

It took me a while to figure out how to create an ephemeral container without using the kubectl debug command, so I'll share the recipe here.

💡 Why you may want to create an ephemeral container bypassing the kubectl debug command?

Because it gives you more control over the container's attributes. For instance, with kubectl debug, it's still not possible to create an ephemeral container with a volume mount, while on the API level it's doable.

Using kubectl debug -v 8 revealed that on the API level, ephemeral containers are added to a Pod by PATCH-ing its /ephemeralcontainers subresource. This article from 2019 suggests using kubectl replace --raw /api/v1/namespaces/<ns>/pods/<name>/ephemeralcontainers with a special EphemeralContainers manifests, but this technique doesn't seem to work in Kubernetes 1.23+.

Actually, I couldn't find a way to create an ephemeral container using any kubectl command (except debug, of course). So, here is an example of how to do it using a raw Kubernetes API request:

Using heavy container images for Kubernetes workloads is inefficient (we've all been through these CI/CD pipelines that take forever to finish) and insecure (the more stuff you have there, the higher are the chances to run into a nasty vulnerability). Thus, getting debugging tools into misbehaving Pods on the fly is a much-needed capability, and Kubernetes ephemeral containers do a great job bringing it to our clusters.

I definitely enjoyed playing with the revamped kubectl debug functionality. However, it clearly requires a significant amount of the low-level container (and Kubernetes) knowledge to be used efficiently. Otherwise, all sorts of surprising behavior will pop up, starting from the missing processes and ending with unexpected mass-restarts of the Pods.