These mysterious HTTP 502s happened to me already twice over the past few years. Since the amount of service-to-service communications every year goes only up, I expect more and more people to experience the same issue. So, sharing it here.

TL;DR: HTTP Keep-Alive between a reverse proxy and an upstream server combined with some misfortunate downstream- and upstream-side timeout settings can make clients receiving HTTP 502s from the proxy. 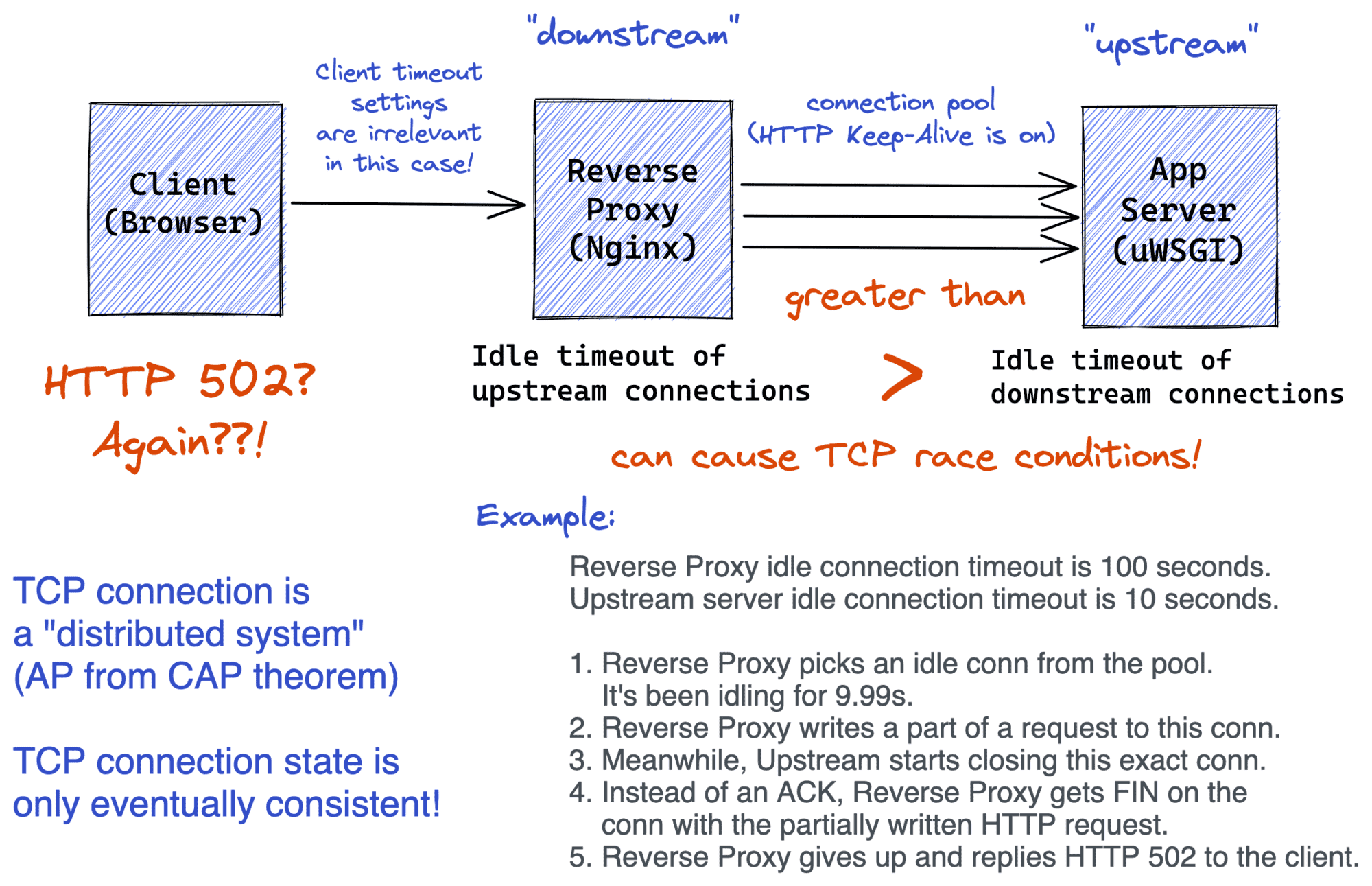 Below is a longer version...

HTTP 502 status code, also know as Bad Gateway indicates that a server, while acting as a gateway or proxy, received an invalid response from the upstream server. Typical problems causing it (summarized by Datadog folks):

However, sometimes there seems to be no apparent reason for HTTP 502s responses while clients sporadically see them:

Long story short, it was a TCP race condition.

A detailed explanation of the problem, including some low-level TCP packet analysis, can be found in this lovely article. And here, I'll just try to give a quick summary.

Why does it matter for us?

While this serverfault answer says that the HTTP Keep-Alive should be used only for the client-to-proxy communications, from my experience, proxies often keep the upstream connections alive too. This is a so-called connection pool pattern when just a few connections are heavily reused to handle numerous requests.

While one endpoint (the proxy) can still be thinking that the connection is totally fine, the other endpoint may have already started closing the connection (the upstream).

So, the proxy starts writing a request into a connection that is being closed by the upstream. And instead of getting the TCP ACK for the sent bytes, the proxy gets TCP FIN (or even RST) from the upstream. Oftentimes, the proxy just gives up on such requests and responds with immediate HTTP 502 to the client. And this is completely invisible on the application side! So, no application logs will be helpful in such a case.

In a (reverse_proxy + app_server) setup, the reverse proxy should be dropping connections more frequently than the app server. Otherwise, clients will see sporadic HTTP 502s.

The problem is actually quite generic. Theoretically, it can happen in any point-to-point TCP communication where the connections are reused if the upstream drops connections faster than the downstream. However, most of the time, the problem manifests itself with a reverse proxy talking to an upstream with HTTP Keep-Alive being on.