Disclaimer: Django is a general-purpose web framework, while Kubernetes is, well, a container orchestrator, if you will. Obviously, so different projects shouldn't be compared at all. However, in this series, I try to demystify Kubernetes and show that its API is a pretty much normal HTTP API and that it can be extended in rather familiar ways. Hence, the title. And no, below you won't find a true comparison of Kubernetes and Django, sorry :)

There are many ways to extend Kubernetes with custom functionality, starting from writing kubectl plugins and ending with implementing scheduler extensions. The exhaustive list of extension points can be found in the official docs, but if there were a ranking based on the hype around the approach, I bet developing custom controllers or operators, if you will, would win.

However, while controllers get a lot of the press attention, in my opinion, writing custom controllers most of the time should be seen as just one (potentially optional) part of the broader task of extending the Kubernetes API. But to notice that, a decent familiarity with a typical workflow is required.

While the Kubernetes community offers a broader and more generic definition of a controller, after more than a year of dealing with Kubernetes controllers in the wild, I've come up with the following explanation that covers the majority of the custom controllers I've seen so far:

But what, in essence, is a resource? In Kubernetes own words:

Thus, if resources are merely Kubernetes API endpoints, writing a controller for a resource is just a fancy way to bind a request handler to an API endpoint! 🙈 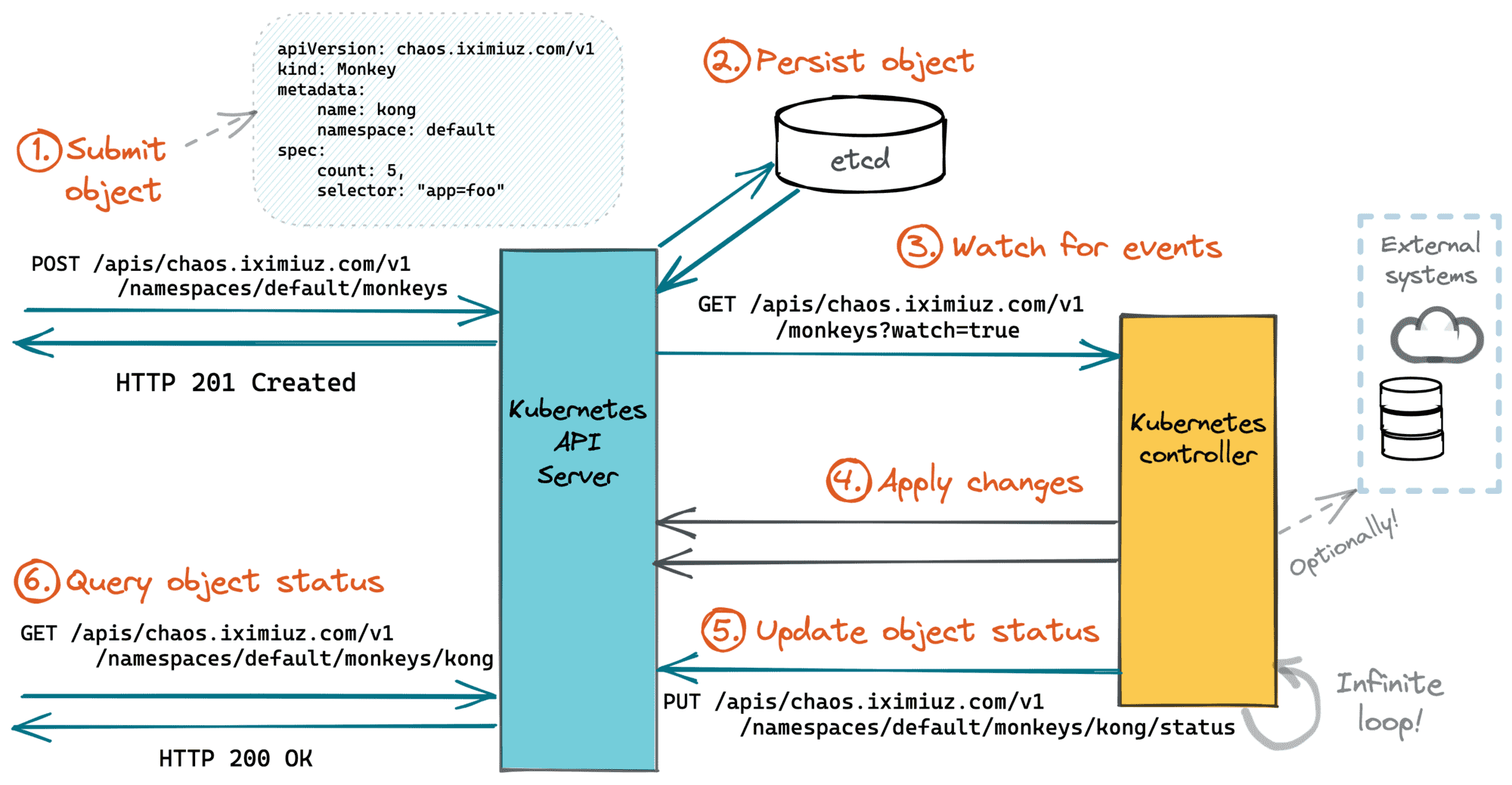 The main difference between controller-based handlers and more traditional request handlers is that the processing happens asynchronously to the actual API request. The API requests creating or modifying Kubernetes objects (e.g., POST, PUT, PATCH) just schedule the work for controllers (via recording the intent), and the API requests fetching the objects (GET, WATCH) are used to get back the processing status.

If adding request handlers to the Kubernetes API happens through writing controllers, how adding new API endpoints is done?

Before answering this question, it's important to understand that there are two types of endpoints in the Kubernetes API:

Are there some prominent examples when the Kubernetes API was extended using the Aggregation Layer?

Or it's always Custom Resources paired with admission hooks and controllers?


Controllers typically work with the first type of endpoints. So, how a new endpoint serving a user-defined type of objects can be added to the API?

First, a CustomResourceDefinition (CRD) needs to be written. The CRD itself is an object that describes the new, custom resource. Most importantly, the CRD should contain the name and the versioned object schema (i.e., the fields) of the new resource type.

Then, the CRD needs to be submitted to the cluster. Applying a CRD to a cluster creates a new Kubernetes API endpoint serving a Custom Resource type. As simple as just that!

Objects of the custom resource type look and behave much like the built-in Kubernetes objects, they benefit from the common API features (CRUD, field validation, discovery, etc.), and at the same time, they have attributes required to solve your custom use case.

💡 A Custom resource can be useful on its own. - by registering a new resource, you immediately get (some limited) persistency, out-of-the-box field validation, RBAC, and more. However, most of the time, a custom resource is created to be accompanied by a custom controller.

Getting back to the request handling...

The superpower of Kubernetes controllers is attributed to their asynchronous nature, but so is their greatest limitation. Requests to the Kubernetes API creating, modifying, or deleting objects work as a record of intent - the actual processing logic is deferred until the next control loop iteration. But what if synchronous request handling is required?

Well, it's also possible in Kubernetes! But for that, you'd need to intervene in the resource request processing by the Kubernetes API server.

Upon arrival to the API server, a request passes through the following stages before the change is persisted in etcd (or alike):

And most (or all?) of the above stages can be extended with custom logic!

Thus, configuring an admission webhook will make the Kubernetes API server send the resource instance (wrapped into an envelope called AdmissionReview) to a custom HTTPS endpoint before actually persisting it.

Calling an admission webhook endpoint blocks the request processing by the Kubernetes API server. The implementation of the admission webhook can perform arbitrary validation logic, populate object's attributes with non-trivial defaults, label or annotate the object, or even modify other Kubernetes resources or make changes to external systems!

⚠️ In general, side-effects in webhook handlers should be avoided. In a webhook, it's impossible to know whether the object will actually be persisted or rejected by the processing chain. If the action on the resource is rejected by one of the checks, any changes made by the preceding steps will need to be somehow reverted.

Thus, webhooks is an easy way to bind synchronous request handlers to Kubernetes API endpoints. And this completes the feature parity of the Kubernetes API with any other traditional HTTP API 🎉

Let's try to put everything on one diagram. Here is how a more or less comprehensive Kubernetes API extension workflow can be depicted: 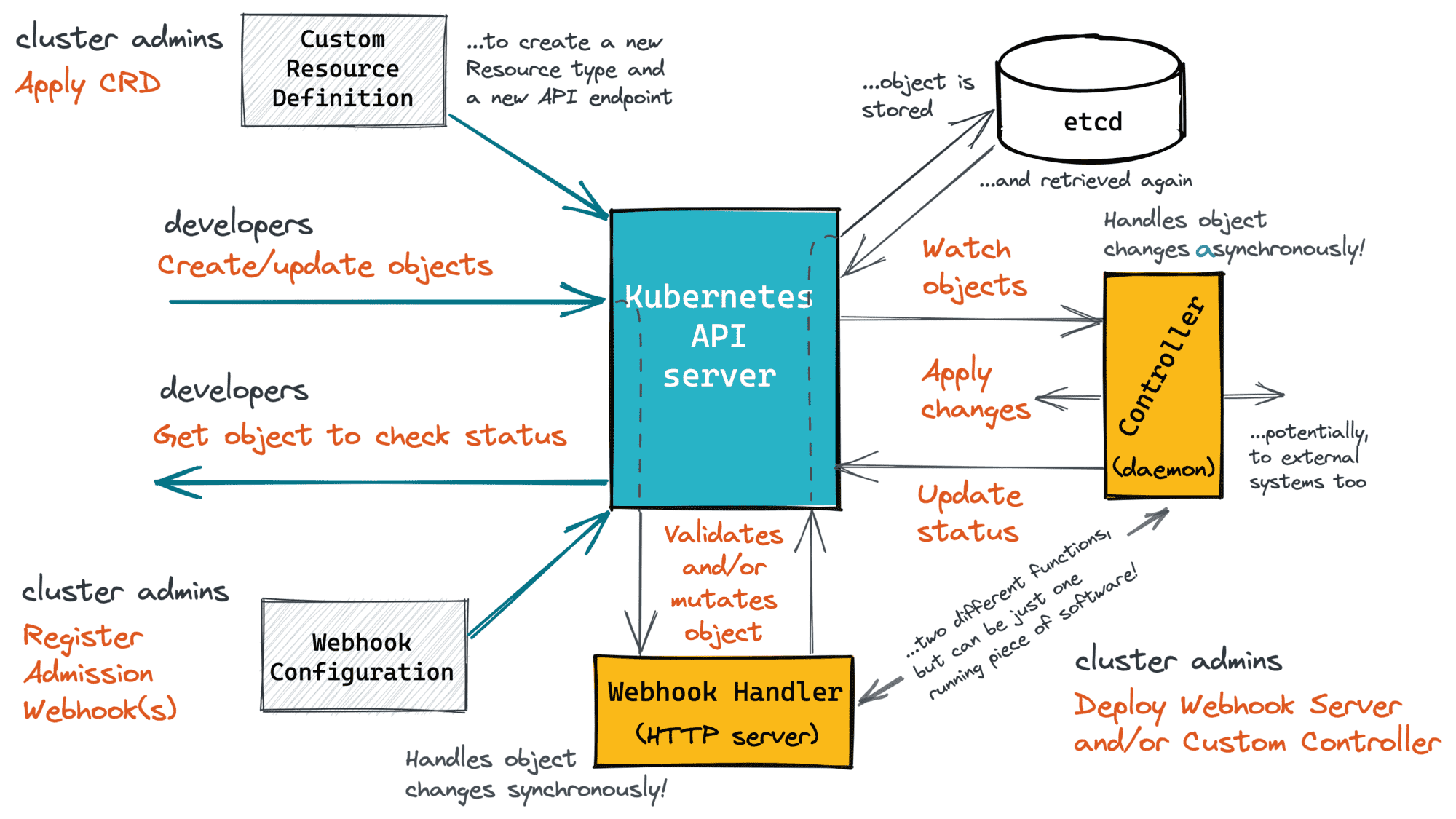 Hopefully, it's clear now that custom controllers is just one part of the bigger task of extending the Kubernetes API.

I hope, following the above explanation you've also noticed how Kubernetes is no different from good old tech we're all familiar with:

Seriously, though, drawing analogy with the familiar stuff generally helps me understand the new concepts faster. But when just understanding is not enough and fluency is required, practice is what usually helps me to internalize the concepts for real. However, this is a topic for another write-up. Stay tuned!