The official Kubernetes Go client comes loaded with high-level abstractions - Clientset, Informers, Cache, Scheme, Discovery, oh my! When I tried to use it without learning the moving parts first, I ran into an overwhelming amount of new concepts. It was an unpleasant experience, but more importantly, it worsened my ability to make informed decisions in the code.

So, I decided to unravel client-go for myself by taking a thorough look at its components.

But where to start? Before dissecting client-go itself, it's probably a good idea to understand its two main dependencies - k8s.io/api and k8s.io/apimachinery modules. It'll simplify the main task, but that's not the only benefit. These two modules were factored out for a reason - they can be used not only by clients but also on the server-side or by any other piece of software dealing with Kubernetes objects.

First, a quick recap. Familiarity with the following concepts is vital for the success of the further discussion:

It's also important to differentiate between objects in a broad sense and Kubernetes "first-class" Objects - persistent entities like Pod, Service, or Secret serving as a record of intent for the cluster. While every API object must have an API version and kind attributes for the sake of its serialization and deserialization, not every API object is a "first-class" Kubernetes Object. 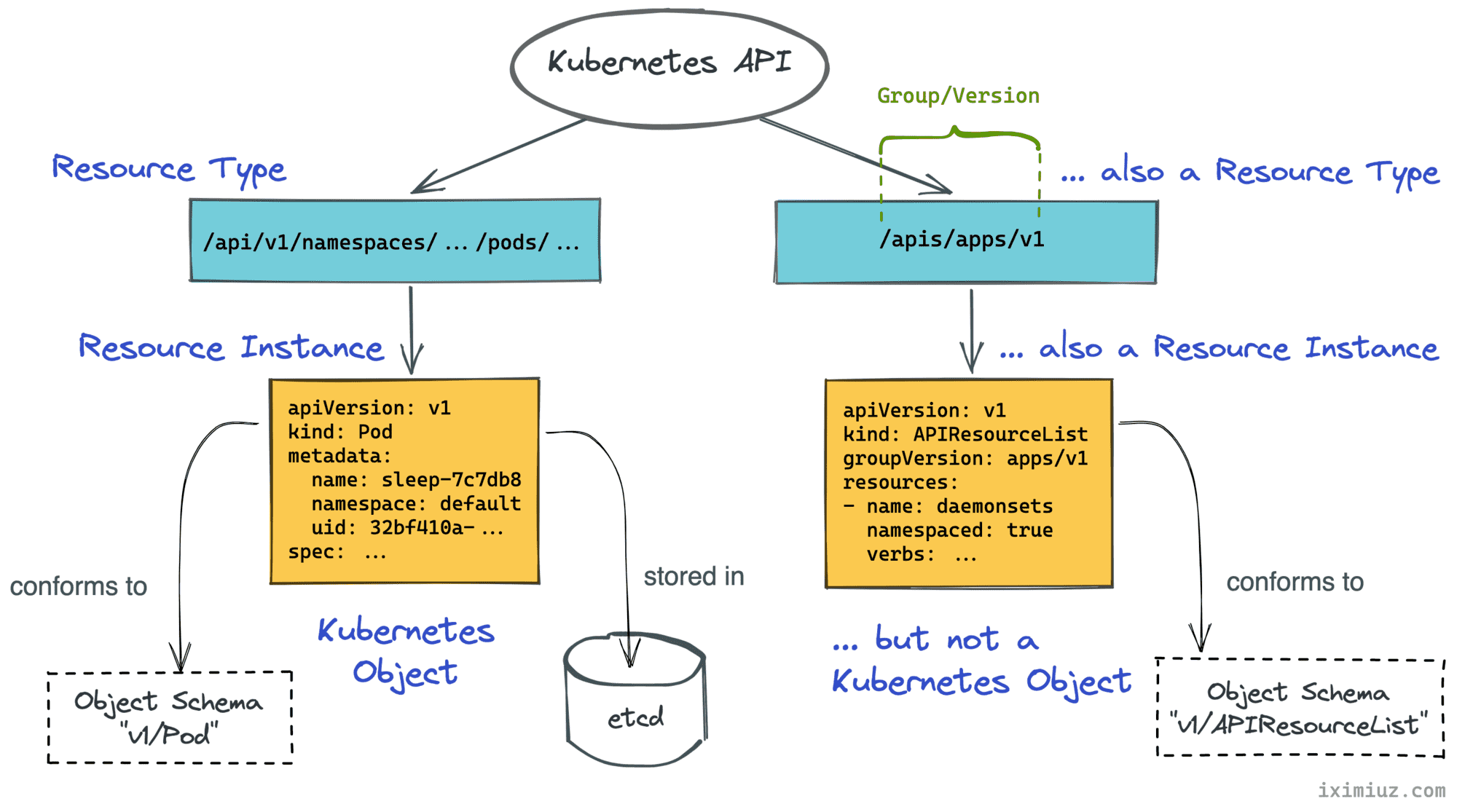 Go is a statically typed programming language. So, where do all the structs corresponding to Pods, ConfigMaps, Secrets, and other first-class Kubernetes Objects live? Right, in k8s.io/api.

Despite the loose naming, the k8s.io/api module seems to be solely for API type definitions. It's full of concrete structs closely resembling those YAML manifests we all know :

The module defines not only the top-level Kubernetes Objects like the Deployment above but also numerous auxiliary types for their inner attributes:

All the structs defined in the k8s.io/api module come with json and protobuf annotations. But be careful:

💡 Pro Tip - If you dig dipper, you'll see that k8s.io/apimachinery implements serialization into JSON by just calling the standard json.Marshal() on the supplied object. So, fear not and use json.Marshal() whenever you need to dump an API object.

Summarizing, the k8s.io/api module is:

Unlike the narrowly-scoped k8s.io/api module, the k8s.io/apimachinery module is rather manifold. The README describes its purpose as:

This library is a shared dependency for servers and clients to work with Kubernetes API infrastructure without direct type dependencies. Its first consumers are k8s.io/kubernetes, k8s.io/client-go, and k8s.io/apiserver.

It'd be hard to cover all the responsibilities of the apimachinery module in a single post without being too shallow. So instead, I'll talk about packages, types, and functionality from this module I stumble upon in the wild the most often.

While the k8s.io/api module focuses on the concrete higher-level types like Deployments, Secrets, or Pods, the k8s.io/apimachinery is a home for lower-level but more universal data structures.

For instance, all these common attributes of Kubernetes Object: apiVersion, kind, name, uid, ownerReferences, creationTimestamp, etc. If I were to construct my own Kubernetes Custom Resource, I wouldn't need to define data types for these attributes myself - thanks to the apimachinery module.

The k8s.io/apimachinery/pkg/apis/meta package defines two handy structs - TypeMeta and ObjectMeta that can be embedded into a user-defined struct, making it look much like any other Kubernetes Object.

Additionally, the TypeMeta and ObjectMeta structs implement meta.Type and meta.Object interfaces that can be used to point to any compatible object in a generic way.

Click here for the uncompressed version of the diagram.

Another handy type defined in the apimachinery module is the interface runtime.Object. Due to its simplistic definition, it may look useless:

But in reality, it's used a lot! Kubernetes code was written long before Go got the support of true generics. So, the runtime.Object is much like the traditional interface{} workaround - it's a generic interface that is widely type-asserted and type-switched in the codebase. And the actual type can be obtained by checking the kind of the underlying object.

💡 A runtime.Object instance can be pointing to any object with the kind attribute - full-fledged Kubernetes Objects, simpler API resources carrying no metadata, or any other kinds of objects with a well-defined object scheme.

⚠️ Note that while looking similar, meta.Object cannot be safely down-casted to the corresponding Kubernetes Object due to a non-zero struct offset.

💡 Keep GroupVersionKind and GroupVersionResource in mind until the Scheme and RESTMapper discussion - their knowledge will come in handy.

Yes, you've heard it right. But jokes aside, it's another important and widely used data type.

Working with Kubernetes Objects using concrete k8s.io/api types is convenient, but what if:

The unstructured.Unstructured struct for the rescue! This struct allows objects that do not have Go structs registered to be manipulated as generic JSON-like objects:

Under the hood, these two structs are just map[string]interface{}. However, they come with a bunch of handy methods simplifying nested attribute access and JSON marshaling/unmarshaling.

📖 Example - How to work with unstructured Kubernetes Objects in Go code.

📖 Example - How to convert unstructured objects into typed and back.

Another tedious task when working with an API from a statically typed language is marshaling and unmarshaling data structures into and from their wire representation.

A non-trivial amount of apimachinery code is dedicated to this task:

Noticed these Object's in the snippet above? Yep, those are runtime.Objects aka Kind-able interface{} instances.

The runtime.Scheme concept pops up here and there when working with client-go, especially when writing controllers (or operators 🤔) that deal with custom resources.

It took me a while to understand its purpose. However, approaching things in the right order helped.

Think about the potential implementation of Unstructured to Typed conversion: there is a JSON-like object, and a corresponding object of some concrete k8s.io/api type needs to be created from it. Probably, the very first step would be to figure out how to create an empty instance of the typed object using the kind string.

A naive approach could look like a huge switch statement over all possible kinds (and API groups, actually):

A smarter approach is to use reflection. Instead of the switch, a map[string]reflect.Type can be maintained for all registered types:

The advantage of this approach is that it requires no code generation and that new type mappings can be added at runtime.

Now, consider a deserialization problem: a piece of YAML or JSON needs to be converted into a Typed object. The very first step - object creation - will be very similar.

Turns out, creating empty objects by their API Groups and kinds is such a frequent task that it got its own component in the apimachinery module - runtime.Scheme:

The runtime.Scheme struct is such a registry containing the kind to type and type to kind mappings for all kinds of Kubernetes objects.

The runtime.Scheme struct is actually very powerful - it has a whole bunch of methods and implements some foundational interfaces like:

However, the runtime.Scheme is not almighty. It has mappings from kinds to types, but what if instead of kind only the resource name is known?

That's where the RESTMapper kicks in:

The RESTMapper is also some sort of a registry. However, it maintains mapping of resources to kinds. So, feeding a string like apps/v1/deployments to the mapper gives the API Group apps/v1 and the kind Deployment. The RESTMapper also can deal with resource shortcuts and singularization: po, pod, and pods can be registered as aliases for the same resource.

In the wild, there is often a global singleton runtime.Scheme. However, it seems like the apimachinery module itself tries to avoid state - it defines RESTMapper and Scheme structs, but does not instantiate them.

Unlike runtime.Scheme that's widely used by the apimachinery module itself, RESTMapper is not used internally, at least at the moment.

Types, creation, and matching logic for fields and labels also live in the apimachinery module. For instance, here is what can be done with the k8s.io/apimachinery/pkg/labels package:

Working with the Kubernetes API in code is impossible without handling its errors properly. The API server might be completely gone, requests may be unauthorized, objects might be missing, and concurrent updates may conflict. Luckily, the k8s.io/apimachinery/pkg/api/errors package defines some handy utility functions to deal with the API errors. Here is an example:

Last but not least, the apimachinery/pkg/util package is full of useful stuff. Here are some examples:

The k8s.io/api and k8s.io/apimachinery packages is a good starting place to learn how to work with Kubernetes objects in Go. If you need to write your first controller, jumping straight to client-go, or even to controller-runtime or kubebuilder will likely make the learning experience too rough - there might be way too many knowledge gaps. However, taking a look and playing around with the api and apimachinery packages first will help you keep peace of mind during the rest of the journey 🧘

It's been three articles, and I haven't touched client-go yet. Next time, it'll be an article about the client, I promise!